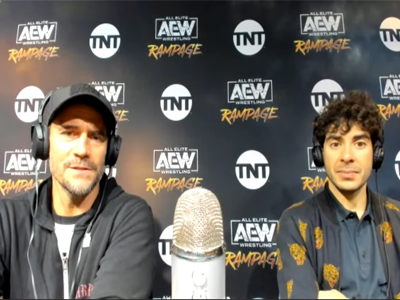 Instead of celebrating the fact that Daniel Bryan Bryan Danielson, Ruby Riott Soho, and Adam Cole have joined All Elite Wrestling (AEW) at the AEW All Out 2021 Pay Per View, cynical WWE fans are on the attach by saying “those wrestlers weren’t drawing in WWE anyway” or “AEW has too many wrestlers on its roster”. To quickly debunk the former argument of “drawing”, nobody is drawing in the WWE including the WWE brand itself. Roman Reigns is keeping Smackdown above 2.0 million but it’s only a matter of time when he runs out of opponents or if, God forbid, he gets injured.

The “AEW has too many wrestlers on its roster” argument is silly to me due to the following facts:

(1) According to Forbes magazine and the Wrestling Observer Newsletter, AEW was profitable during pandemic 2020 and are only “in the red” for 2021 due to heavy investments in their Video Game project. Reportedly, if you back out the Video Game investments, 2021 would be profitable too. If the AEW game is returning to the THQ roots as it reportedly is, then they’ll make their money on that investment.

(2) AEW isn’t overpaying wrestlers. Shad Khan did not become a billionaire by overpaying employees or paying too much for stuff. They are not overpaying wrestlers and that hype about “providing health insurance” is only for the EVPs and just a few select full time wrestlers or employees. Furthermore, AEW is in a position of strength when it comes to any wrestlers that the WWE releases. Guys like Miro, Brodie Lee, FTR, Matt Hardy, Ruby Soho, and others who lost jobs at WWE have very limited choices where to work. Ring of Honor, Impact, and NWA aren’t paying anybody and New Japan Pro Wrestling is picky who they want to use. Therefore, Tony Khan doesn’t have to overpay former WWE wrestlers.

(3) AEW wrestlers are closer to being Independent Contractors. In case you haven’t noticed, their wrestlers perform elsewhere besides AEW and that includes even the EVP Kenny Omega performing elsewhere. Particularly for the midcarders, it is likely that their contracts pay them X amount per appearance rather than a base salary. Therefore, if a wrestler doesn’t appear one week for AEW because they have another wrestling gig, AEW doesn’t have to pay them.

Yes, it’s very likely that AEW is probably paying CM Punk and Bryan Danielson a good chunk of change. However, it’s also very likely that TNT is potentially paying part of their salaries OR AEW will recoup some of that salary by promotion appearances that both Punk and Danielson could make on TNT’s behalf. TNT executives were reportedly excited about CM Punk’s debut and it could before a good financial reason. For example, in order for TNA to obtain Hulk Hogan, SpikeTV reportedly paid his salary during the late 2000s. Brother.

As long as AEW is profitable, who should care how many wrestlers that they have signed anyway?

Let’s do a little Math exercise to see how many wrestlers are REALLY on each roster:

OK, you got me… AEW has 97 male wrestlers on their roster… Wow… 22 Female wrestlers may seem higher, but many of them are acting as valets instead of performers.

Does it stack up per hour, however?

With 119 total wrestlers divided by 5 hours of total televised wrestling = 29.8 Wrestlers Should appear per hour…

For the WWE, here are their shows:

And WWE has been trimming down their roster for the past 2 years for “financial reasons” but they might be looking at analytics the way I am right now. In addition, WWE overpaid many of its talents with the arrival of AEW out of fear that wrestlers would jump to that company. However, WWE pumped the brakes on that policy starting with the 4/15/2020 cuts and has been significantly reducing its roster ever since.

Look at those NXT numbers… Oh boy. NXT, for its 2 hours of programming, has more talent on its roster than Smackdown for its 2 hours of programming. Provided how Vince McMahon and Bruce Prichard are reportedly producing the NXT shows moving forward, more cuts are likely to be coming particularly after the WWE just signed a few new crops of students for the Performance Center (which I couldn’t account for in my counts above).

You got me, folks… AEW technically has a bloated roster. The numbers don’t lie…

AEW is a new promotion.

AEW is not paying former WWE talents nearly as much as WWE did.

Many wrestlers are acting as true Independent Contractors in AEW, getting paid per appearance.

AEW is reportedly profitable, aside from 2021’s video game investment.

AEW is just throwing things at the wall and seeing what sticks. It’s likely that there could come a day when Tony Khan releases a bunch of wrestlers, too, as carrying over 100 talents for just 4 hours of content per week is probably a bit much. I guarantee that Shad Khan knows analytics, too, as he’s a master of keeping costs down for any business venture he owns (ask his fans about his NFL and Soccer teams). For example, while Jacksonville may have been purposely tanking to obtain the #1 Draft Pick this past year, the defensive side of the ball had some serious Pro Bowl players on it that were just traded away due to not wanting to pay them.

So yeah… AEW does, in fact, have a larger wrestling roster at the moment… You guys are right.

Context is everything, though… Many of the AEW wrestlers are double dipping on roles backstage, which the WWE disallows. Kenny Omega, Young Bucks, Cody Rhodes, and Brandie Rhodes were all part of my counts, for example, and they have Executive or Chief in their titles. Brandon Cutler, Christopher Daniels, Colt Cabana, Dustin Rhodes, Luther, Paul Wight, QT Marshall, Leva Bates, and Rebel also have backstage roles with AEW. And also for the fact that AEW is paying WAY LESS than what the WWE is and the Independent Contractor thing, I guarantee that AEW’s “Salaries, Wages, and Benefits” Expense line item is MUCH LESS than the WWE’s. I’m willing to bet on that.

And that is why WWE is releasing wrestlers… It’s the higher salaries that Nick Khan, using different analytics with real salary numbers, is reviewing.

Everything now depends on if the recent talent acquisitions and future acquisitions can actually help AEW shows begin to draw more than 1.1 million viewers. I believe that the collection of former top WWE stars, particularly CM Punk and Daniel Bryan, will eventually help AEW Dynamite get around 1.5 million to 2 million consistently within the next 6 months. It always depends on Creative. TNA, for example, had a few loaded rosters too but then you’d have to suffer Dixie Carter’s ego on display throughout their Impact shows.

You gotta have good Creative to put a great Roster in position to succeed. Look at those LOADED early 2000s rosters and yet RAW’s viewership was in massive decline. Seriously, look at that 2002 roster… LOADED and yet they were declining throughout the entire year. It had the Attitude Era + WCW Free Agents (Hall, Nash, & Hogan finally appeared) + Ohio Valley Wrestling call-ups beginning to appear. Yet, it declined. Why? Because Stephanie McMahon was AWFUL at her job as Creative Lead and already burned the WWE audience out with the prior year’s WCW/ECW Invasion angle.

Should be fun to watch and see if AEW’s talent investments pay off or if it causes them to begin releasing wrestlers, too.