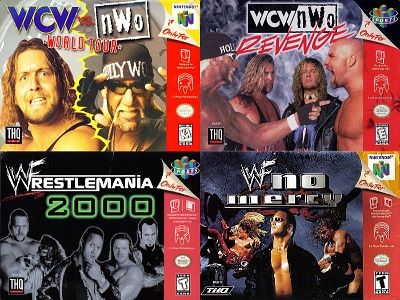 Last weekend, I put a lot of time into my ASK MR. TITO Column posted on Saturday and then spent late Saturday and Sunday nights compiling a brand new YouTube video entitled Unwrestled Mysteries: The Infamous Macho Man Randy Savage and Stephanie McMahon RUMOR on NoDQ’s YouTube Channel… On top of that, anyone working in the financial industry has “Holiday Haze”, as having the Memorial Day off makes you think that Tuesday is really Monday…

So yeah, I had nothing for my usual Tuesday/Wednesday spot… I thought about discussing Tony Khan‘s recent tirade about WWE maybe working with New Japan Pro Wrestling which is on top of the on-screen Impact Wrestling promos that he does… I was going to compare that to how other Executives or Bookers get distracted when they concentrate too much on their on-screen stuff instead of the backstage scene or the company’s inner workings. I would have brought up Eric Bischoff joining the NWO, Vince McMahon going overkill on his heel boss character through 1999, Vince Russo during WCW’s 2000 year, Triple H burying CM Punk during 2011, and Dixie Carter getting intoxicated with her on-screen character to even notice that TNA was in trouble.

But I have written that column, in pieces here and there, before…

Let’s have some fun. For a while now, I’ve had a YouTube video that I’ve wanted to compile but its difficulty in cutting up Video Game clips would make it time consuming. Instead, I can do what I do best and place it into a written piece for all of you to enjoy.

If you’re at least 30 years or older, all I have to say is “do you remember the Nintendo 64? and your immediate answer is “oh, do I? Let me count the ways…” I know that many adore Super Mario 64 and to this day, hold it as their favorite Mario game. Then, the Legend of Zelda series produced the Ocarina of Time and to this day, this remains one of the best video games of all time, if not outright #1, on most gaming lists out there. RARE kept delivering great games, as many love the Banjo games… But for my money, NOTHING beats “Conker’s Bad Fur Day” not just for the single player mode, but getting out that sniper rifle and wasting squirrels as they try to escape the beach.

Let me give you a great story… Through 1996, I actually retired from video games. In one of my biggest mistakes ever, I sold my Super Nintendo and my massive game collection. I wasn’t playing the system as much and I was of that teenage age where I was driving, working, going on dates, etc… From about Fall of 1996 through late 1999, I was done with gaming. Then, I was hanging out with a friend of my brother’s and he had a Nintendo 64. The guy had 3 specific games that BLEW MY MIND: (1) Wrestlemania 2000, (2) Conker’s Bad Fur Day, (3) Mario Golf. In my head, I was baffled at how good video games became following the 16-bit era. Immediately, I went out and bought a Nintendo 64 but with Wrestlemania 2000 being temporarily out of stock, I bought WCW Revenge instead. Damn that was a great game!

In my opinion, the Nintendo 64 showed the value of having a great wrestling video game could be and THQ absolutely landed gems on that system. The AKI Corporation produced these amazing “Virtual Pro Wrestling” games in Japan and THQ began porting those first into World Championship Wrestling (WCW) games and then through late 1999, World Wrestling Federation (WWF, now WWE) games. Holy cow, they were the BEST wrestling video games ever produced!!! In my opinion, they still hold up to this day. I feel bad for the younger generation of fans who have to suffer with the annual 2K Games releases each year. Back then, we had 4 separate THQ games that would could rotate and enjoy at anytime!

That’s not to say that the Super Nintendo had bad wrestling games… Though LJN took a bad wrap for its awful movie licensed games, they were beginning to perfect their formula on the 16-bit systems. Though “Super Wrestlemania” was a bit stiff, the Royal Rumble and Monday Night RAW games were LEGIT great. I love the RAW one, in particular, as it worked with the Hudson Multi-tap and allowed for 4 player action. My thumbs have scars from the blisters created by that game! Then, Midway created the Wrestlemania: The Arcade Game with Acclaim porting it to 16-Bit systems… Sorry, but I love that game. It’s Mortal Kombat fighting style in the ring… I loved dealing multiple Razor’s Edges to opponents!

The beauty about the THQ Nintendo 64 games is that they arrived at the perfect time, during the Monday Night Wars, while having a pick & play control scheme that was simple enough for anyone to figure out quickly. Yet, the fighting style actually takes a while to master and get good against really competitive players. I’ve had singles matches on Wrestlemania 2000 with friends that have lasted 45 minutes and both of us had finger tips that were bleeding from grinding to win lockups. The hilarious part is how the WWE saw the raging success of WCW Revenge from 1998 and went after THQ to begin making their games during late 1999. WWE released “WWE Attitude” from Acclaim during July 1999 and then released “Wrestlemania 2000” during October 1999. Think about that for a second… WWE just gave you a video game during July 1999 and yet they come up a whole new game just 3 months later. Monday Night Wars were GREAT!

To have some fun, I’m going to give you my Top 5 Nintendo 64 Pro Wrestling Wrestling Video Games.

And to make it easier, I’m going to stick with North American releases. I could seriously argue that Virtual Pro Wrestling 2 is one of the finest video games ever produced, but many of you have not played that before. Most of you who are 30 or older have played many of the North American Nintendo 64 releases.

#5 – All other games not from THQ
Sorry, but if your Pro Wrestling game on the Nintendo 64 wasn’t made or ported by THQ… It SUCKED. Go ahead and give me the many excuses why War Zone or Attitude were enjoyed… Then, you need to fully admit that you ignored the horrible gaming engine of those Acclaim games because you loved the roster that it had. Just admit it! ECW’s Acclaim games created later were hot garbage too!

And now, let’s get to the REAL GAMES:

#4 – WCW vs. NWO: World Tour
After we saw the cool WCW vs. the World on the Playstation, Nintendo 64 owners were blown away by WCW vs. NWO: World tour on the Nintendo 64. Arriving in late 1997 during the peak of WCW Nitro’s run, we were amazed at the great representation of the wrestlers and their moves. While the graphics were a big blocky, the gameplay legitimately felt like you stepped into the shoes of your favorite WCW wrestler. My only gripe with this game, in hindsight, is the lack of modes and the thinner WCW roster as it was packed with many international performers instead of the deep WCW roster that occurred back then. This game was like “Batman Begins”, as a great sequel that improved everything was on its way just 1 year later…

#3 – WWF No Mercy
Here is where many of you will HATE me… I don’t like this game as much as I like Wrestlemania 2000. To me, this has major lag because it just couldn’t compute the game with the older Nintendo 64 game at this point. While the roster is AMAZING and we had new cooler modes like guest referee and the ladder match, the game’s performance on the older Nintendo 64 hardware hurts it for me. Don’t get me wrong, it’s WAY better than the Acclaim garbage, but I kept going back to Wrestlemania 2000 for a smoother gameplay experience. The graphics just had a darker feel to them, too, whereas Wrestlemania 2000 and WCW Revenge seemed brighter. I believe that the Titantron videos take up a ton of space on this cart… Other than the graphical slowdowns and lagging, while the infamous threat of your memory cards getting wiped out, this is still an impressive game.

#2 – WCW/NWO Revenge
Now we’re talking… I could seriously argue that this is one of the best sequels in video game history. It retained everything great from World Tour and beefed up the talent roster while giving us more gaming modes. On top of that, they began to flirt with Create-a-Wrestler with the Costume Changing feature. But you know what I like most about this game? The different sets… You could come out to WCW Nitro or a Pay Per View. It was MIND BLOWING at the time. This talent roster, holy cow… LOADED. All of your WCW favorites are here and it’s just before many wrestlers bolted to the WWE. If you ever wondered how great WCW was as a promotion from 1996-1998, just play this game.

#1 – WWF Wrestlemania 2000
In my opinion, the most complete and perfect wrestling video game ever made. They took everything great from WCW/NWO Revenge and introduced the North American world to Create-a-Wrestler. Holy cow, I spent HOURS perfecting my wrestlers’ movesets. The roster was loaded with WWE greats, as anybody that had any kind of role in the WWE was on that game. There were women wrestlers on that game for the first time! Then, you had the first ever story mode for the THQ games and it was very competitive. The prize unlock at the end of the game was awesome and rewarding, as you earned Shawn Michaels if you would win the WWE Title at Wrestlemania. The game runs smoothly while having graphical upgrades from the prior 2 WCW Games.

While we had 1 THQ wrestling game per year, they were different games that gave you significant upgrades per game. They weren’t just taking the previous year’s game and adding to the roster. Plus, 2 of the games were for WCW and the other 2 were for WWE.

THQ kept producing great games for Playstation 2 and GameCube through the mid-2000s… I know many who love the early “Smackdown vs. RAW” games while I really love the GameCube “Day of Reckoning” games. After that, THQ lost their way and just kept making the same annual game for each video game system. Then, after THQ folded, 2K Games kept that lazy tradition going.

We’ll never have it this great again on Pro Wrestling video games, just as the Pro Wrestling product will never be as great as it was during the late 1990s…

That said, I have played a few additional AKI Corporation games.

Both Def Jam Vendetta games are awesome and I really like the Ultimate M.U.S.C.L.E. games. If you still have some of your older disc systems, those are worth checking out.

Back when the Nintendo 3DS was heavily porting Nintendo 64 games (Ocarina of Time, Majora’s Mask, Star Fox 64, etc), I made a simple argument that WWE should port Wrestlemania 2000 or WWE No Mercy to the 3DS but with today’s roster. Keep the games simple as how the AKI Corporation made them, the WWE would have made a killing. Dads who LOVED the Nintendo 64 games would have bought this game for their kids to enjoy. Opportunity lost.

WWE has fumbled HARD lately on their recent video games by rushing annual 2K Games and the Battlegrounds game was just OK. If I were AEW, I would look at WWE’s mistakes in the video game market and then look back on what wrestling fans want.

Do yourself a favor… Go buy one of the many Nintendo 64s available on ebay and buy up any of the THQ/AKI WCW or WWE video games. This will be well worth your time and money!