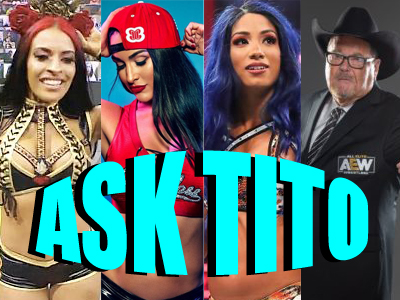 The EXCELLENCE IN COLUMN WRITING is back in your face and here for a 4th of July edition of “Ask Mr. Tito” where I answer your questions about Current Events and whatever else in column form. Happy 4th of July, to one and all… I usually pride myself in putting together columns on Holidays, as I’m thinking that eventually, someone will log into a computer or their smartphone after consuming lots of food and just needs something to do until the evening’s festivities pick up.

Lots to cover this week, so I’ll just jump right into your questions.

What did you think of Zelina Vega’s WWE return?

Already commented on it, as she reportedly re-signed with the WWE a few months back. Simply put, she was once a person who stated “I support unions” and stood her ground against the WWE’s tough stances on using 3rd Party Services. Surprise, surprise, those Twitch followers started dropping weeks after she left the WWE and eventually she returned. More shocking, the WWE released her husband on 6/2/21…

And she lost her very first match back. Now, I’m not going to throw a hissy fit about that like the rest of the Internet Wrestling Community… Why? Because Liv Morgan is more talented inside the ring as a worker and has more to offer to the WWE with her beauty. It’s Liv’s time and I’m glad that she is racking up some wins.

Zelina Vega, though, was heavily exposed in this segment with Sonya Deville and Liv Morgan. Seriously, Zelina is 6 inches or more shorter than both ladies. Will the Women’s Division have a Cruiserweight division, too? How can I believe that Zelina could win in a fight against any of the division when she is much smaller than everyone?

I just didn’t see the hype when she was paired with Andrade, who is also short and NOT making much of an impact in AEW… As a wrestler, she’s a mismatch for everyone.

She should feel lucky that the WWE gave her a second chance, particularly after she disrespected them after signing a contract with them.

What did you think of Nikki Bella’s comments towards Chyna years ago and her recent apology?

Nice of the politically correct crowd to care now and not 10 years ago when Nikki Bella made the comment about Chyna. What took you so long? By you jumping all over Nikki now, you should look in your own mirror and ask why you didn’t protect Chyna when SHE WAS ALIVE. Many, many people said nasty things towards Chyna while she was alive and NONE OF YOU woke pieces of crap stood up for her then.

Of course it was bad taste for Nikki to say that back then. She was on a show with Joan Rivers where many rough things were said but often in a comedic manner. 10 years ago, Nikki was still in her 20s and many of us in that age said stupid things. Her younger self said that on television and now it can be brought up to her 37 year old self now. What the politically incorrect mob doesn’t realize is that PEOPLE CAN EVOLVE. The 37 year old version of Nikki would likely NEVER say this, nor would she do Joan’s show now either.

Right now, it seems like we’re trying to re-write Chyna’s history and attempting to shame her critics. Instead of shaming her critics, why don’t you shame her enablers who let her pass away at the young age of 46?

Nikki can try to apologize all she wants, but this apology wouldn’t have happened if the Internet Mob didn’t harass her to prompt it. Simply put, she should have said “I was in my 20s and on a show that promoted saying critical things. I’m an older, wiser person now and have evolved. Thank you and good night.”.

Celebrities need to realize that they don’t have to appeal to the Internet Mob for anything they say, past or present. Majority of people aren’t living online, nor will they hold you accountable for every tiny little thing that you say. Most don’t get offended over everything or understand that things are said in a joking manner.

What did you think of Sasha Banks liking an anti-vaccination post?

Are we seriously monitoring what celebrities LIKE now on Social Media? And that is news?

HERE is what I’m going to tell all of you about being “anti-vaccine”. F them. If they don’t want see health benefits from vaccines that will help protect them against viruses or diseases, then let them fumble their own ball. For this COVID-19 virus, I have pleaded with friends and family members to obtain the FREE COVID-19 vaccine. Despite all of the obvious health benefits of obtaining said shot(s), many refuse to still get those shots. Save your breath… You can’t force someone to do something, just as they can’t prevent the Coronavirus from delivering pain if they don’t get vaccinated.

Some people believe that the government is injecting them with tracking devices with vaccines. If anyone believes that, then let them. They’ll just miss out on health benefits because they believe in goofy conspiracies. Besides, what’s the harm in having tracking devices injected in you when you’ve got nothing to hide? (I’m kidding on that, of course).

At the end of the day, we’re now scrutinizing LIKES on social media and that creates breaking news.

Sasha is cool with me as a wrestler and if she obtains COVID by not being vaccinated, that’s on her. The vaccine is readily available and FREE and most people have had their shots already. If she hasn’t, then she’s just harming herself and that’s her choice. Let her make her own bad choices that hurt her, but let’s just calm down on the reviewing of all of her social accounts to see what she is Liking or not.

What did you think of AEW Dynamite’s viewership this past Wednesday?

It was fine… Considering that they were out 4 weeks due to the NBA Playoffs, their brand has diminished a tad because they have broken the routines of wrestling fans. With RAW doing 1.5 million this week on average for the 3 hours, AEW is less than 600,000 viewers away from catching RAW. That is unheard of…

Remember – AEW is a company that is just rounding the base to close out its 2nd year on TNT for Dynamite. Making a wrestling promotion TAKES TIME, especially if done from scratch. It took Eric Bischoff 3 full years to begin defeating the WWE and Bischoff stepped into a WCW job that had NWA Mid Atlantic’s legacy feeding into it. AEW started from scratch and in a wrestling environment where the talent pool is much thinner.

As I keep saying, they are just 1 breakout star or 1 signed big name (Lesnar, Cena, Punk) from making this “war” interesting. WWE keeps shrinking and AEW is isn’t declining. With the way WWE operates lately, they are pissing off many talents. Nobody thought that WCW Nitro was worth a damn and then Lex Luger showed up. Then, Hall & Nash appeared later.

I’d give AEW Dynamite a full month to regain their footing on Wednesday nights and then we can go from there.

What did you think of Jim Ross’s “WWE Dynamite” botch?

As AEW Dynamite was ending, Jim Ross called AEW Dynamite as “WWE Dynamite”. Obviously, this was said in error just as he called Kenny Omega the “WWE Champion”. I don’t think Ross is slipping, as he just worked for the WWE for 2 decades and saying “WWE” is probably in his muscle memory.

I do see this as trouble for him, though. I sense that the EVPs, particularly Kenny Omega and the Young Bucks, don’t like him. Omega is likely to still be sore about the Randy Orton praise over him by Ross and now this happens. I’m sure that Omega has given Tony and earful lately.

If you’re asking me, I’d take Jim Ross off of AEW Dynamite. Why? Because he is too much associated with WWE as a brand. One could compare Ross in AEW like Mean Gene Okerlund joining WCW and that’s not the case. Gene joined a WCW Brand that had also signed former WWE stars that Gene was comfortable interviewing. Contrast that to Jim Ross in AEW. I guess he called Cody and Christian, but neither guy was a top wrestlers in the WWE when Ross was calling matches. Big difference.

If I were advising AEW, I’d seriously consider having Jim Ross for talent relations. Look at what he did for the WWE during the mid to late 1990s through 2004. The guy knows how to find talent and groom them into superstars. AEW should want something that really badly. Instead, their roster consists of friends of the EVPs or WWE castaways. With Ross overseeing it, he can change the vision of talent development and help mold the wrestlers of tomorrow.

If AEW lets his contract expire during April 2022, I hope that WWE hires him back to help oversee the Talent Developmental with John Laurinaitis. Create the “Best of Both Worlds” and rebuild the WWE into someone who can create top drawing superstars again. WWE has lost their way by allowing Triple H run the developmental system so poorly. as no top drawing male main event talent has ever been groomed by him. Why not? WWE has 40 writers and 50 statisticians on their payroll. Why not stack the Talent Relations department too?