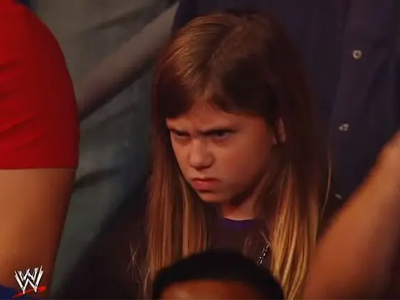 So… Where were all of you YEARS and MONTHS ago when these wrestlers needed you the most? Why didn’t you hijack crowd chants when there was trouble back then? Why haven’t you cut back on your WWE consumption when the WWE Creative Team or whomever did you favorite wrestler wrong? Where were your boycotts when the WWE not only screwed with your favorite wrestlers, but outright released them as well.

The cheers for John Cena are killing me… When I wrote as a columnist during the early 2010s and heavily defended John Cena for carrying the company on his back, I was attacked by “fans” and other columnists for supporting the “modern day equivalent of Hulk Hogan”. Wait a second… I thought Hulk Hogan was pretty damn good during the 1980s and he tried to do the right thing by putting over Warrior. I’m pretty sure that John Cena tried his best to put over Sheamus, work with Miz & Del Rio as “Main Event contenders”, and he cleanly put over CM Punk, Daniel Bryan, Kevin Owens, and AJ Styles. THOSE events are captured on video. Yet, whenever enthusiastic younger fans chanted “Let’s Go Cena”, we’d hear “Cena Sucks” by older fans.

Now, it’s all cheers? I guess it took 7 years of WWE’s business declining, thanks to Cena’s absence, for you to realize his greatness to begin cheering now… Nice. RAW is down over 2 million viewers, houseshow business tanked, lower attendance everywhere, and merchandise sales are way down without Cena. But it takes his July 2021 return to help make Roman Reigns an bigger star for you to realize this?

We’ve heard random “CM Punk” chants since his 2014 exit, but little action by you, the fans. Take me, for example… I have a well documented Boycott of the debuting WWE Network from its February 2014 launch until I tried it for free during June 2015. I am documented, through my columns back then, of refusing to hand the WWE my money for their new Network based on how they treated both Daniel Bryan and CM Punk. During 2011, I was the ONLY ONE calling that he was getting buried by not just the WWE, but by a jealous Triple H. All of you lavish Triple H because he gives you an Indy alternative to the WWE known as NXT, but you’re not seeing how he screws with wrestlers that he personally doesn’t like. He ruined CM Punk’s career during 2011 and wanted to ruin it again during 2014’s Wrestlemania.

But go ahead and randomly chant “CM Punk” at WWE events that you paid top dollar to attend. THAT WILL SHOW THEM! Make sure that you stop by the merchandise stand, too, and buy some WWE merch and wear it while you’re chanting “CM Punk”.

And these “We Want Wyatt” chants. Oh spare me… Where were these chants from April through July? Bray Wyatt/Fiend could have used your help to hijack segment after segment OR just turn the television OFF when Bray Wyatt/Fiend doesn’t appear. Nope, instead you were quiet. You only showed outrage at Wrestlemania 37 when his match with Randy Orton went poorly and then you moved on. Dead silence for FOUR MONTHS until the shocking WWE release of Wyatt on 7/31/2021. None of you demanded that Bray Wyatt be put back on television and that’s a fact.

Ohhhhh, big of you to chant “We Want Wyatt” during Bill Goldberg‘s segment. You know what Bill Goldberg does? He always brings eyeballs to the television… Granted, they are older eyeballs from the Monday Night Wars era, as the oldest demographic is the one popping. Then, Vince can get easy Wrestlemania or SummerSlam bucks from former WCW fans who want to relive their childhoods, teenage, or college years by seeing their hero, Bill Goldberg, one more time.

I’m NOT defending the WWE’s use of Bill Goldberg. In his mid 50s, the guy can barely move and runs out of steam within about 1 minute of each of his matches. Terrible on the mic…

BUT the fact is that WWE is reliant on OLDER NAMES because YOU, the “wrestling fans”, do NOT fully support the full time wrestlers of today. FACT! Here are just a few examples of our failures as wrestling fans for the past decade:

– Didn’t hold the WWE accountable for messing with CM Punk and Daniel Bryan from 2011-2014.

– Only show outrage about wrestlers being unused when they are released, see 4/15 cuts and other cuts from 2020-2021.

– You always hated and underappreciated John Cena. Now, you suddenly realize how much he was carrying things from 2010-2014.

– You did nothing from April to July regarding Bray Wyatt’s absence.

– All of you hated Braun Strowman until he was released.

– While you show phony outrage for WWE releases, you refuse to support AEW as a competitive option.

– You build up someone like Kofi Kingston to be pushed and then do nothing when he’s torn down.

– Suddenly, you’re big Iconics fans when they are released. Never knew that. Did you buy their merchandise or media when they were still on the WWE roster to support them?

– You kept watching. Yes, many have left the WWE sinking ship, but their numbers are still profitable for Comcast and FOX.

– FACT is that while WWE has fewer viewers now, WWE is making more per capita off each fan. In other words, the “loyal fan base” that they have are paying MORE money than ever on WWE tickets and merchandise.

Please stop insulting my intelligence with your Pro-Cena chants now, “We Want Wyatt”, or “CM Punk” chants. You were NOT there when many wrestlers needed them and you’ve only reacted AFTER the fact. Be more proactive as a wrestling fan and NOT reactive when something bad happens. Quit making a mockery of yourself and the rest of the wrestling fanbase.

Be PROACTIVE and not REACTIVE…

Let me help you correct yourself… For one, admit that John Cena is one of the greatest pro wrestlers of all time. Officially state that please. Second, if CM Punk appears on AEW, tune in EVERY week. If you see a segment on AEW Dynamite that is pure and utter crap, then just walk away BUT keep the television on to keep those viewership numbers strong! Then, support whatever wrestling promotion that Windham Rotunda, the man now formerly known as Bray Wyatt/The Fiend, joins. If it’s Impact Wrestling, become an Impact fan and support him. Whatever.

WWE needs you more than they know. Their TV contracts come up during 2024, both of them. A major DROP in the viewership for both RAW and Smackdown will cause LESS money to be thrown at them by Comcast and FOX. Simple as that… Furthermore, if you help AEW Dynamite start to defeat RAW/Smackdown in viewership, that will cause Network executives to sweat. Boycott the WWE Network… If Comcast sees a massive drop in those numbers, they’ll reconsider the 5 year deal that they just signed and become more demanding on the WWE for quality. Don’t buy the merchandise. Period. You don’t an extra shirt or title belt. Plenty of other fun things to buy out there.

THAT is how you stick it to the WWE when they do your favorite wrestlers wrong or if they are heading in the wrong direction.

Don’t SPEND MONEY ON TICKETS, PARKING, GASOLINE, and MERCHANDISE to attend a WWE Live show and chant “CM Punk” or “We Want Wyatt”. Don’t be so obtuse.