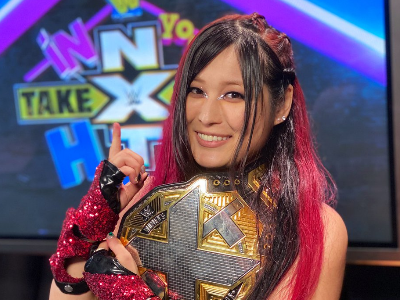 During the WWE NXT Takeover: Stand and Deliver media call, Triple H commented on Io Shirai’s status with the brand after losing the NXT women’s title…

“Io Shirai has earned the right to do what she wants to do. To me, if Io Shirai wants to take time off, she takes time off. If she wants to come back and go after Raquel Gonzalez, she’s earned that right. If she wants to do something else for a bit, or any of that, she’s earned the right to do all of it. It’s an interesting thing here where whenever somebody loses in NXT, they’re so dominant, they’re so big, they’re so whatever. They have this incredible run. Then, all of a sudden, there’s a bump in the road. They lose a match. Then everybody goes, ‘Clearly they’re going someplace else.’ Why is that? It’s just a funny thing, because anybody in the world loses someplace else, nobody goes, ‘Oh, they’re going someplace else.’ There’s always more to do. There’s always more to proving you’re the best. There’s the next challenge. The next competitor. There’s the next all of those things. For me, it’s whatever Io wants to do, but I don’t see that as she lost one match over the past three hundred something days she’s been champion, all of a sudden she’s just moving on.”

Shirai teased on Twitter that she is not done with Gonzalez…

My body is sore everywhere today.

Everyone called me crazy after yesterday’s match.
However, I think Raquel is crazier than me- she didn’t move when I dived into her, and she still won… this time.#NXTTakeOver @RaquelWWE https://t.co/MBBukfZAk0