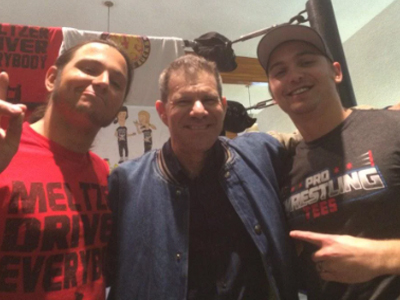 Like many, I really wasn’t too familiar with The Young Bucks prior to their ROH and NJPW run between 2015-2019. That doesn’t mean that I hadn’t heard of them at all though, I saw them as Generation Me in TNA, although at the time I didn’t know they were previously known as The Young Bucks. Honestly I just saw them as these cheap Hardy Boys knock offs, I heard the internet chatter about these “spot monkeys” and the fact they don’t tell stories in their matches, just jump from high spot to high spot. They were “killing the business.” They stole every iconic taunt from past wrestlers, they were obnoxious, they were brash, they were……….HEELS!

I like reading, not story books though, autobiographies. More specifically, wrestling autobiographies.  The first book I got was “Have a nice day,”  by wrestling legend Mick Foley, from that point on I was hooked. I enjoyed learning about wrestlers and their journey to not only becoming pro wrestlers, but superstars, I love the first hand accounts of these Men and Women that are living the dream of nearly every single wrestling fan out there. After all, most of them all started as wrestling fans too. I can get lost for hours in an autobiography as I learn more and more about the wrestlers I grew up watching, as well as others that are involved in the wrestling business but not actually wrestlers, (Former WWE writer, Brian Gewirtz’s book is one of the most interesting reads ever.)

As I said before, I primarily started watching The Bucks during 2015-19 and if I’m being completely honest, I couldn’t understand the hatred these guys were getting. They are a young, high-flying tag team much like some of the best cruiserweights and light-heavyweight teams from the 90s and early 2000s. Rey Mysterio & Billy Kidman, Edge & Christian, The Hardy Boyz and Too Cool just to name a few. Hell you could go further back and add The Rockers and The British Bulldogs to that list, all were innovators for their time. The Young Bucks Style is built on Lucha Libre, a high risk/high reward, prettier style that originated in Mexico. This style of pro wrestling was made popular in America in the mid 90s when Eric Bishoff brought some of the best Luchadores in the world over to WCW to be the workhorses of his aging roster. True, these cruiserweights were given an opportunity in ECW by Paul Heyman first in America, WCW however had a larger audience. The Bucks are smaller guys just like the performers previously mentioned, and are innovators too. So why so much hatred?

Change with the times.

One of the most common complaints of The Young Bucks is they don’t sell moves and they don’t sell pain. Its completely unfounded. For proof, go and watch Matt Jackson’s entire 2018 run across every promotion he competed in. He sold a back injury for an ENTIRE YEAR! Yes they will have  sequences in a match where they will shake off an attack to deliver some offense of their own. But if we are being honest, most wresters of the modern era do that too. It adds to the drama of the match and makes for a great visual. I don’t need to see a babyface stuck in a bearhug for 3 minutes anymore, that’s just doesn’t sound entertaining to me. Long gone are the days of two 6ft 8, roided up, oiled up cartoon characters battling in a test of strength, and that’s OK. It worked in the 80s, but that was 40 years ago. Every sport in the world has changed, Football, Soccer, Tennis, Boxing, etc, and it all comes down to Humans being able to push the limits of what their bodies can do.

Their tag team style is a bit of a cluster.

A true statement when you look at it from the outside. Their matches often breakdown into pure chaos where you end up with no idea who the legal men actually are. For the traditionalist I can completely understand the frustration you may feel from this. One could argue though that wrestling is based around fighting, and in fighting you do anything you can to win, it is up to the ref to maintain control and order after all. The late, great Bobby “The Brain” Heenan once said.

It’s only cheating if you get caught.

Of course there is an art to tag team wrestling, and you need rules to create drama. The babyface in peril, and the eventual hot tag are staples of great tag team wrestling, along with double team moves. The Bucks have basically taken these ideas and turned the volume up to 11. You also have to remember that in both ROH and NJPW they utilize a 20 count outside the ring, not a 10 count. This allows for more action to take place on the outside, something that Matt and Nick have become used to. All of this does not make their style of tag team wrestling wrong, it’s just different, dare I say even modern.

Another complaint I kept hearing about The Young Bucks was their personalities sucked and they stole from everyone. Again this statement can be considered true, I for one couldn’t understand why they stole every gimmick known to man. From the mannerisms and facial expressions of Randy Savage, to the “SUCK IT” DX taunt and the NWO/Kilq “TOOOO SWEEEEEET” hand gesture. No gimmick was sacred to them. But why did they feel the need to use all these gimmicks? They are extremely talented performers, surly they shouldn’t have to resort to “gimmick infringement” just to get over? I still really enjoyed their ring work, and once AEW started and I began watching them more and I became more of a fan. The question about this gimmick nonsense still bugged me though. It was during the pandemic that they released their autobiography and all would be revealed.

Killing the business, from the backyard to the big leagues.

This is the title of Matt and Nick Jacksons autobiography. Reading this title I was very apprehensive about buying this book, but in order to understand the brothers I knew I had to take the plunge. Maybe this book held the answers to the questions I had, perhaps this book would answer their critics. The answer is an emphatic YES! This book dives deep into the guys born Matthew and Nicolas Massie and their improbable journey to pro wrestling glory. It covers a multitude of topics including but not limited to. Being raised in a very Christian family, wrestling fandom and building their own ring. Struggles supporting their families wrestling on the indies, signing with TNA and being forced to change what made them The Young Bucks. Upsetting legends of business and dealing with bad press. Leaning into public perception and using it as a tool and motivator to make it in wrestling. Turning down a multi million dollar deal with WWE and betting on themselves. The book covers it all, but unless you have actually read it I could understand you still having reservation about giving The Bucks their flowers.

Below I have comprised a list of some of the biggest issue people have with The Bucks along with answers the book gives you to help you understand why Matt and Nick are the way they are.

Wrestling is a job, and you got to get paid.

It doesn’t matter if you work a 9-5 job, multiple part time jobs or are a professional athlete. We all have to be able to put food on the table and a roof over our heads. This becomes even more important when raising a family. So why do people continue to crucify The Young Bucks for doing exactly this? They had the business smarts to turn every negative into a positive and be able to make money from it. The Bucks pushed their own merch at indy shows and created a website to sell it when they weren’t at shows just to make ends meet. They created buzz for themselves which made the big companies like NJPW and WWE take notice. If you ask me Matt and Nick perfected the art of the hustle to now be in a position where they have made enough money to take care of their families for life. If you have a dream then you should do EVERYTHING in your power to make it happen, wrestling traditions be damned. We should all be inspired by what Matt and Nick have achieved. You don’t have to like them, but you should respect them.