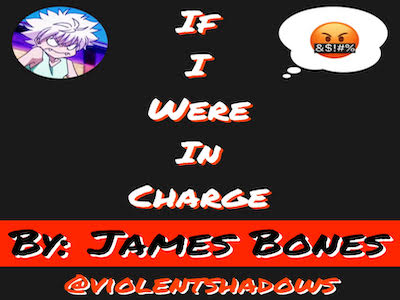 If I Were In Charge – Episode 6

What a cool time to be a wrestling fan, isn’t it? The road to WrestleMania is starting shortly. NJPW has some huge changes on the horizon with Wrestle Kingdom 17 where some big debuts might/will take place. One of the more exciting things to me that’ll take place during the first AEW Dynamite of 2023 is a whole new feel, look and production value. Former WWE Vice President of Global Television Production, Michael Mansury, was hired to be the Senior Vice President and Co-Executive Producer of AEW Television. He’s no schlub with 11 years of WWE experience under his belt. He knows the product and he obviously knows how to make the product come across extremely sharp on TV. In my opinion, this is the perfect time for AEW to make these changes. After all, it’s going to be a really important year for Tony Khan and the promotion.

Have you checked out the teaser video yet for the new set? I’m digging it. The bright LED light bars are absolutely everywhere while changing colors, as well as lasers adding more movement to the whole scene. I’m hoping this is the actual entrance ramp and they’ve really figured out a way to step it up, but also looking different than any other promotion out there. To me, that’s one of the most important things. I have no problem with AEW television coming off much more polished, but I do want it to have its own identity and not look like a super produced WWE show. I get that enough when I watch some RAW and SmackDown.

With change comes a sweet goodbye to the past, but I’m hoping Tony Khan is smart enough to realize what made AEW special in the first place, the more rugged atmosphere. It’s refreshing to see a product that comes across a little less lustrous. When AEW first debuted I enjoyed the fact it was a simple backdrop with a WCW vibe going on with the tunnels and rotating lights. It gave off the feeling that the focus would be on the performers and wrestling, not how many things could be turned into LED displays. I’m hoping Michael Mansury was able to talk Tony Khan into switching it all up, but with some homage to the original AEW vibe. If something isn’t completely broken, trashing it all and starting right from scratch isn’t always necessary. If that is the case however, and we get all new everything, let’s hope it’s positive and still goes with the AEW narrative and doesn’t distract from the fantastic up and coming talent.

Something that I hope gets a lot of attention is the LED screen that displays the wrestlers entrance video. The videos themselves aren’t all that exciting for most of the guys & gals, with few exceptions. Instead of a giant rectangle, I’m hoping something different gets integrated and we can really get a feel for who the wrestler is. Give me an entrance video experience that oozes personality, especially when some of them can’t do that due to either lack of ability or lack of booking. Guys like The Butcher and The Blade could really benefit from a kick ass entrance video. I would love to see a LED ramp that gets to help put some emphasis on characters. Having some animated puddles of blood splash when The Butcher and The Blade take each step towards the ring would be extra fun to see. Luchasaurus coming down not only with his flames, but a complete experience where it looks and feels like a dark prehistoric volcano or meteor shower gives the extra feels to add to his mostly quiet character. There’s definitely a way to do this without looking corny and/or childish. It’s a fine line, but fingers crossed the team can pull off something fantastic.

As for the ring itself, I’ve always been a pretty big fan of black wire ropes, apron, ring posts and turnbuckles. Also, the lighter color mat lets the performers shine. I’m hoping that doesn’t get messed with and we don’t see any LED ring posts or aprons. AEW doesn’t need that, nor would it really benefit them to copy that. It’s time to make sure AEW is visually ahead of the curve and not just doing what other promotions have done. From the 15 second teaser that’s out there, I didn’t see any ring at all, so I have hope this is the case. Tony, whatever you do, leave the ring simple!

The look and the vibe will be scrutinized and judged down to every single detail from the fans and haters, there’s no doubting that. The most important thing to me will be the camera work itself and the production. There’s two thoughts I have here. I like the wide shots and the more relaxed feel of the camera work we’ve been accustomed to. On the other hand, the production and camera angles could be much better sometimes. It will not be possible to hide every bad kick or punch, but let’s hope the zoomed in close ups of those visuals don’t happen again. Mistakes happen, but there’s been some pretty bad production issues when botches happen in AEW. As annoying as those Kevin Dunn camera changes are, at least WWE has their angles covered for the most part if someone does botch. If AEW can get a few more experienced camera men, at least the options for more angles are there. That’ll help with a few things that come across the TV screen, such as a more interactive feel. Also, more angles to choose from are an aid for effective story telling, as well as move impact. Sometimes even just a visual step to the left or right can make something look that much more devastating.

I’m really, really excited for these changes, NoDQers. The small clip already has me super roused to see how the set has changed. When I tune in on January 4th, I have no idea what to expect but I know one thing, it’ll give me a renewed interest in the product. As for the roster, I would bet money that this lights a fire under their asses, too. Much like when you move to a new place, or buy some new furniture, it just radiates excitement. You know what else? The roster deserves this just as much as the fans do. Especially the ones who have been grinding since the start. They deserve a fresh look and feel, which will more than likely shake off any staleness anyone is currently dealing with.

Alright, Tony…here we go. Give us something incredible. Make it feel like AEW but make it feel like AEW on a whole other level. I want to see some fantastic entrance videos. I want to see really good camera work and production in the back from someone who wants to make your wrestling show the most original out there. If this works and helps AEW short term and long term, hopefully it will also have a ripple effect that might open Tony Khan up to giving up some more control to others in other fields. Tony, you have a plethora of talented folks under contract, and those who read my articles know just how bad I want Tony to start using them to his advantage. January 4th, 2023 I’ll be watching very closely with open eyes and most importantly an open mind.

Happy New Year everyone! What do you hope to see when AEW debuts their new look? Let me hear what you think should and shouldn’t change in the comment section. Take care and if possible, support your local animal rescue(s).