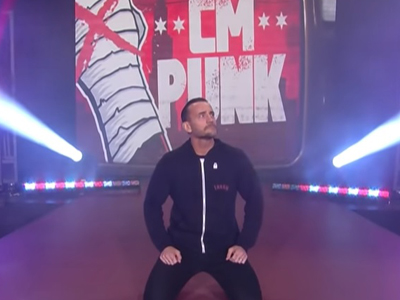 During CM Punk’s AEW debut promo on Rampage last Friday, Punk made a reference to WWE by stating that he “was never going to get healthy” staying in the place that got him sick in the first place. Punk also said that he “left” professional wrestling when he departed from Ring of Honor in 2005.

During his recent podcast, WWE Hall of Famer Booker T commented on the segment…

“CM Punk came back and he had 10 full television minutes to go out there and make his point as far as CM Punk being back. He had the perfect crowd to be able to go out there and really, I’m talking about have a party up in that United Center. But CM Punk came back and took his moment and chose to talk about WWE. That right there was just a total miss as far as I’m concerned [he] struck out. I can only imagine if The Rock had that same 21,000 in Miami, Florida. The Rock would have talked about every landmark in Miami and that everybody in Miami frequented…he would have had those fans going crazy with excitement but CM Punk chose to talk about the WWE and that 9 minutes went back so slow when it could have been a party going on in the United Center.”

“I’m saying from a perspective to where I’m making my comeback and I’m thinking about the other side, that’s totally a place that I wouldn’t even be going. As well as you talk about how the moment started out on a rise and after the music stopped playing, the rise just started going down. It never came back up. That’s a moment for you? I get it, I understand that but my point is the moment, once the bell rings and the bell rings after the music stops as far as I’m concerned and I just don’t think CM Punk delivered the way he could have as far as a promo goes because I didn’t feel the promo. I felt like a guy talking about WWE and when you’re talking about the other side, only thing you’re doing is giving those guys airtime. Of course, I know the AEW crowd will eat that up but for me as a professional, that’s the last thing that I’m gonna be thinking about is the other side. I’m gonna be thinking about the here and the now. Like I said, I could be wrong but I just think he missed a moment there in front of his hometown [with] over 20,000 people…”

“For me, it was the same promo that was given in WWE. It was about WWE. It had nothing meaningful to it as far as what I’m gonna create, who I’m gonna blow up, how I’m gonna take AEW by – coming in being a nice guy and throwing out freaking ice cream bars, who gives a damn about that?” (quotes courtesy of WrestlingNews.co)

You can hear Booker T’s comments around 13 minutes into the podcast.