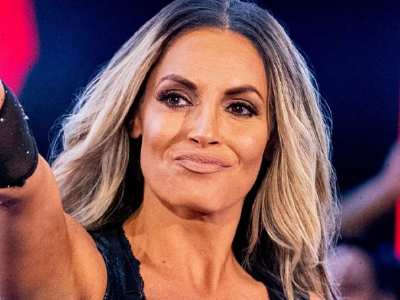 As previously noted, Sasha Banks has publicly called out Trish Stratus for a match on more than one occasion.

In an interview with Vibe 105 Sports, Trish commented on the possibility of them having a match…

“If you’re talking about the dream match that everyone talks about with Sasha Banks? Maybe you might be referring to that match? Or you might not be, maybe that’s what I’m referring to. She is an amazing athlete. People sort of — they fantasize about that match because we had a little face-to-face at the women’s Royal Rumble. And who knows? That is appealing to me. I think she is a fantastic athlete. She has brought so much to the company, and has elevated the women in the industry from what she’s done.”

“I think fans would love to see that. I would love to whoop her butt and prove that I’m the best, and, you know, stuff like that. So yeah, let’s leave it with that little button and say, ‘Perhaps, one day, if I decide to go back in the ring, I mean, I may have to deliver a little Stratisfaction to The Boss.” (quotes courtesy of WrestlingInc.com)