As previously noted, former WWE star Velveteen Dream (Patrick Clark) was arrested on Friday, August 26th 2022 and was also arrested on August 20th for misdemeanor battery and trespassing. Clark’s arrest on August 26th was an out-of-county warrant for “possession of drug paraphernalia.”

It appears that Clark’s arrest on August 20th in Orange County, FL may have violated a probation from a previous arrested in November 2021 by the Alamonte Springs Police Department. Court records indicate that on April 21st 2022, Judge Donna Goerner sentenced Clark to 12 months probation on the possession of drug paraphernalia charge along with $213 in court costs as well as community service as part of a plea agreement. Since Clark was only four months into his probation period, his arrest on August 20th possibly led to a warrant being issued.

The following was stated in the police report…

On November 17, 2021, 2018, at approximately 2338 hours, I was conducting stationary surveillance at the Days Inn located at 150 S Westmonte Dr, which is a well-known narcotics area of the city. I noticed a blue Dodge Challenger bearing FL temporary tag DAW8872 driving around the property with no lights on. I observed the vehicle parking at random spots within the hotel property, staying stationary for a approximately 15 minutes then proceed to move to another parking area of the hotel. The vehicle circled the hotel two more times as it began to travel north on Westmonte Dr making a right at a traffic light to travel on east of SR 436.

I then began to drive east on SR 436 maintaining visual of the blue Dodge Challenger who still had no head lights on. Due to my vehicle being stopped at a red traffic light near SR 400 I requested PFC Belt to assist me with a traffic stop. PFC Belt activated his emergency blue and red lights to conducted a traffic stop on the vehicle on the SR 400 Westbound on ramp with me following directly behind. As PFC Belt exited his vehicle walking to the driver side I proceed to walk on the passenger side of the blue Dodge Challenger. Sitting inside I observed a black male later identified as, Patrick Clark, who was speaking with PFC Belt. Clark provided his Maryland driver’s license and vehicle information to PFC Belt, who then walked back to his patrol vehicle. I remained on the passenger side door keeping a visual of Clark to maintain Officer Safety.

Read Clark his Miranda Rights which he stated he understood and was willing to speak with me. Clark said he in fact was inhaling an illegal substance which he identified as cocaine. I asked Clark if he was at the Days Inn purchasing illegal narcotics which he stated he was there to meet a friend. At no time did he purchase narcotics in the city of Altamonte Springs, he buys his cocaine from a friend in Orlando. At no time was Clark uncooperative during the investigation and he was respectful towards Officers on scene.

A vehicle search was then conducted and I was able to locate the small baggie of cocaine I observed in Clark’s possession in between the driver seat and center console.

The white powdery substances in the clear baggie was field tested and witnessed by Ofc Pfannerstill which showed positive results for cocaine. Clark’s vehicle was towed from the scene by Courtesy Towing.

Based on the above information I find probable cause to charge Clark with F.S.S 893.13 6a Possession of Cocaine when I observed Clark sitting in the driver seat snorting a white powdery substance which field tested positive for cocaine from a small plastic baggie, and .S.S 918.13 1a Destroying evidence when Clark attempted to ingest the cocaine in the plastic baggie as he believed Law Enforcement was no longer able to observe his actions. This was an attempt to deceive law enforcement.

Clark was placed in agency issues handcuffs that were checked for proper fit and double locked. He was then transported to the Seminole County Jail for further processing. The cocaine was weighed on an agency calibrated scale showing bag weight of 0.1 grams. It was then dropped into evidence. 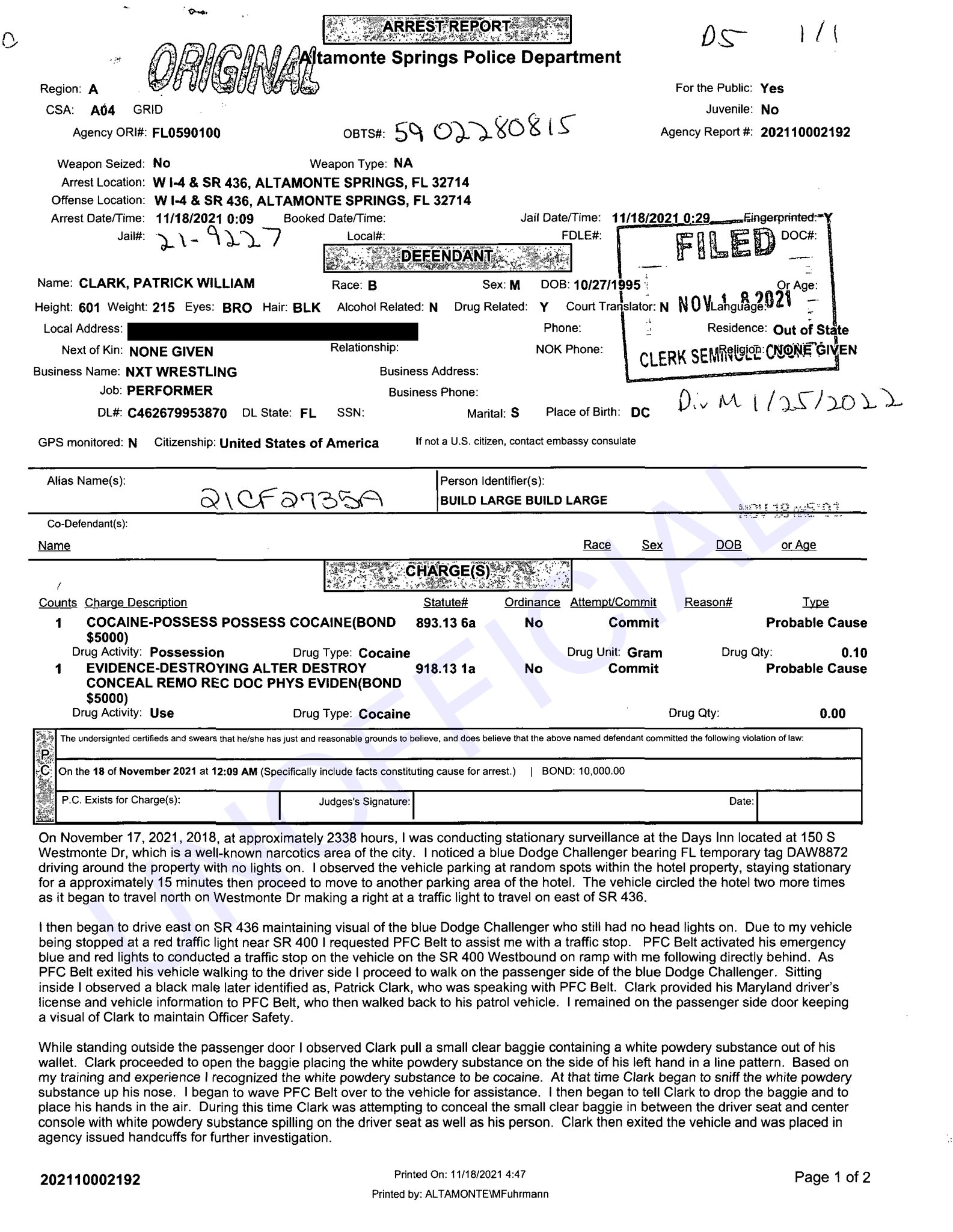 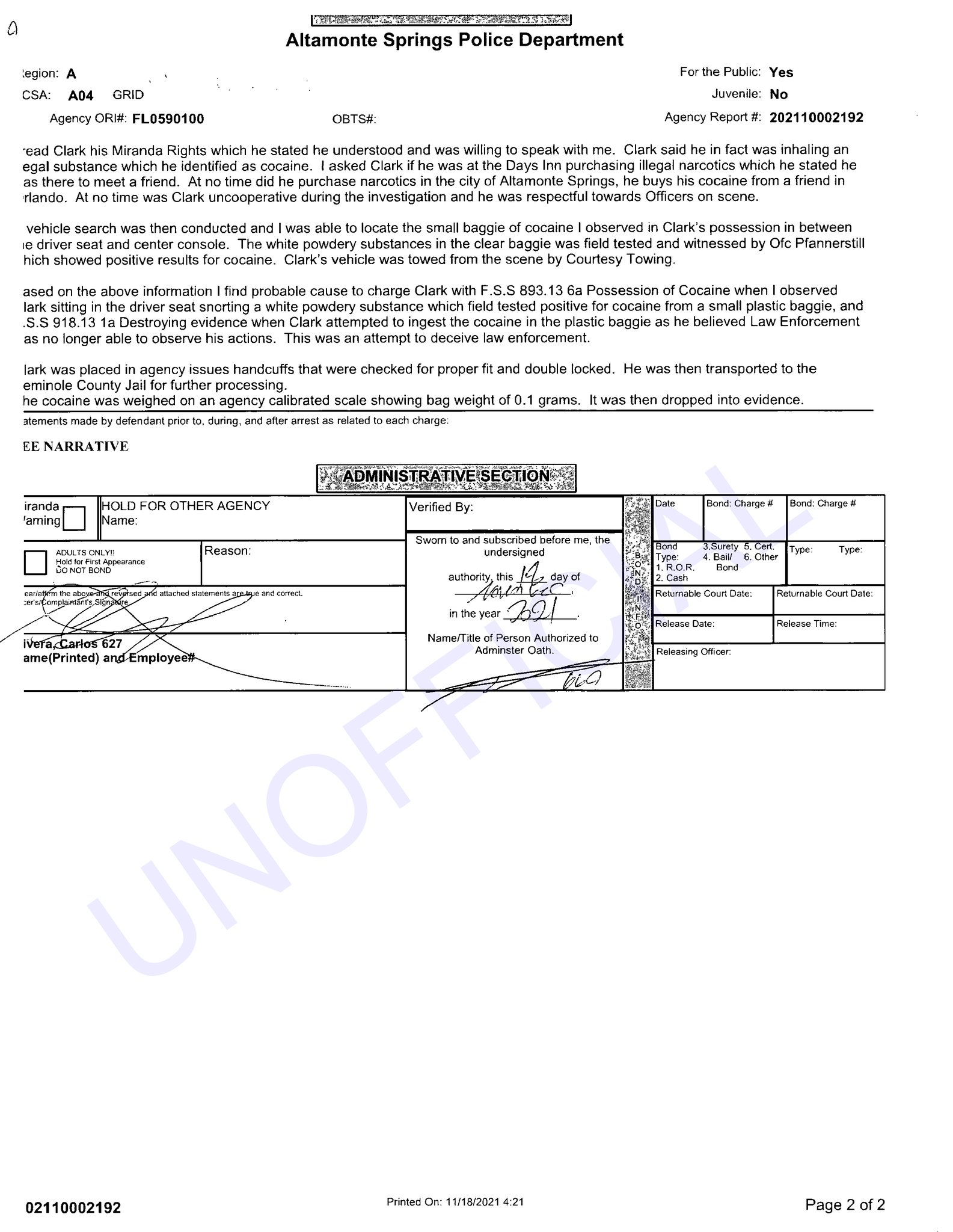