Over the past two years now we have seen both AEW and WWE throw potshots at each other, albeit mostly tongue-in-cheek. The very nature of mentioning another wrestling promotion other than your own sends some fans into a frenzy. This, often leading to viewers at home acting like the pointing Rick Dalton meme..

(added below for reference) 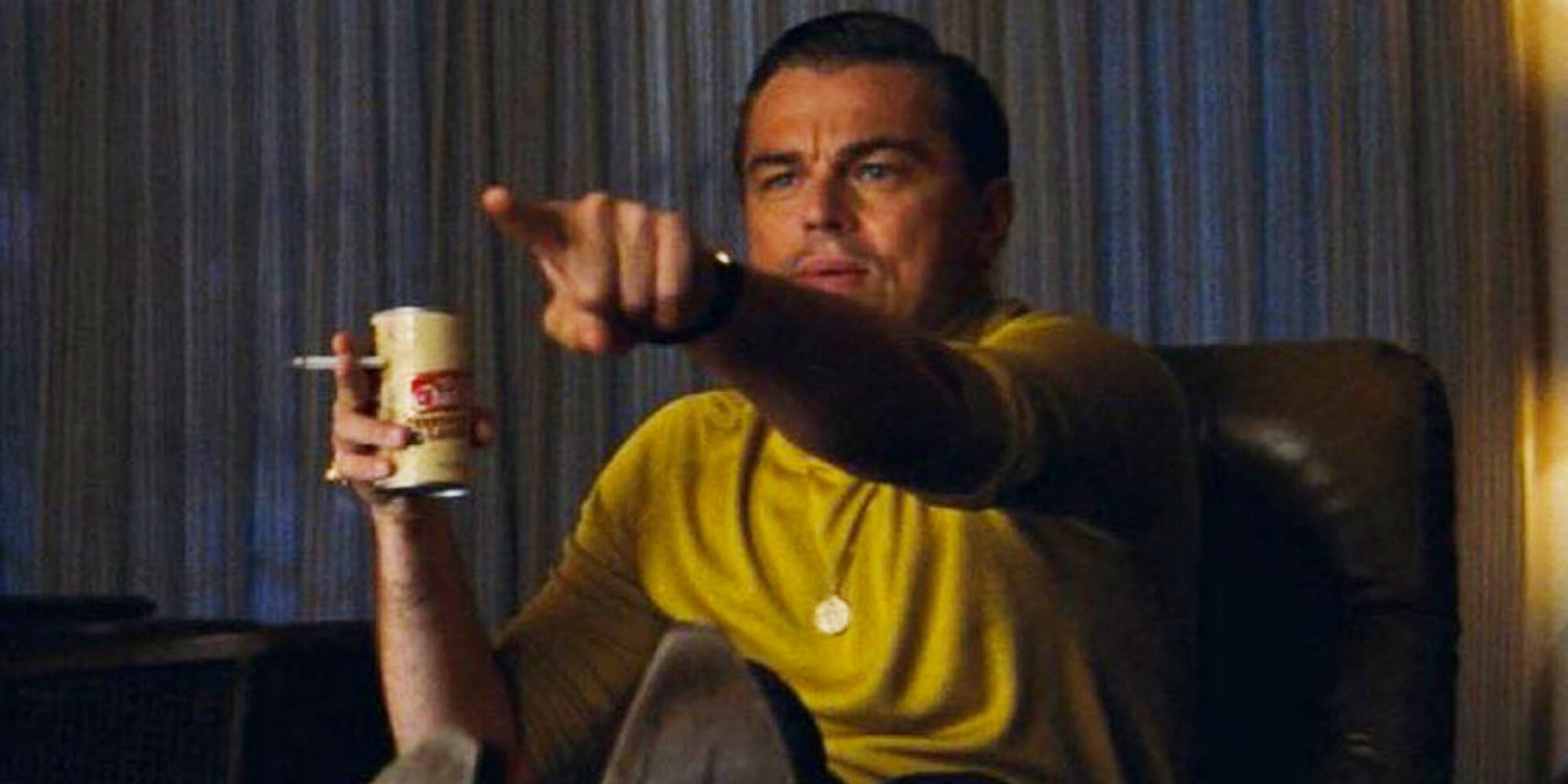 This especially came to fruition in the latest promo between MJF and C.M. Punk where Punk refers to MJF as a “less famous Miz”. In addition, we had multiple WWE names either mentioned or alluded to in the same promo, John Cena and Triple H to be exact. Edge and The Miz just had a PG-rated, slimmed down version of the same promo on Raw last night.

But one hang up of WWE fans is that AEW seems to do it more often than WWE will mention AEW.  So what does this all mean, and why does AEW mention their competition way more than WWE does?

What irks me is this idea that you simply CAN’T mention your competition. This is solely a WWE concept for no other reason than a profit-motive. In other wrestling promotions throughout decades, it isn’t taboo to mention that a talent on your roster worked elsewhere. But in the WWE Universe, for some reason, McMahon has convinced his loyalists that the rules are different over there…

Wouldn’t it be weird if the Los Angeles Rams refused to acknowledge that Odell Beckham Jr.  used to play for the Cleveland Browns?  Or what if The Washington Football Team were hands off about Taylor Heinicke’s XFL days (albeit short)?

This is no different than leaving for a new job, but for your new employer to make sure that your prior job is never brought up under any circumstances. To be blunt, this is kind stupid, isn’t it? This narrative that you can never mention another wrestling promotion is one solely created by Vince McMahon.

When Allison Brie played Annie on Community, they never mentioned her role as Trudy on Mad Men (or GLOW for that matter) — because why would they?

A wrestler carries a brand with them through their career, unlike Movie/TV actors. The notion that you shouldn’t mention a wrestler’s past is simply belittling to the fans and insults their intelligence.

You Are Not Dumb

To keep this short and simple, Tony Khan isn’t going to treat you like you’re a dumb fan. Though lest we forget the continued shots fired at WCW by Vince McMahon himself during the early days of the Monday Night Wars…

When MJF called Punk’s level of relevance after 7 years into question, mentioning Punk’s past was entirely warranted. On the other end, calling MJF a “less famous” Miz, is actually a shot at The Miz. Most intelligent wrestling fans know that MJF is a better in-ring wrestler, and arguably a better promo than The Miz.

Both promotions have called the other out when the moment (or story) calls for it, and Tony Khan isn’t afraid to go further with it when needed. The AEW fanbase is not stupid, and TK knows this.

Remember the times WWE have treated their fans like idiots?

-Fake Razor Ramon
-Rey Mysterio “losing” an eye
-December 2018’s “apology” to the fans by the McMahons only for NOTHING to change
-Raw Underground halts without explanation
-Shane’s “mysterious lockbox” that was never revealed
-The Raw Anonymous GM
-McMahon defeating “god” in a wresting match
-“It was me all along!” — McMahon’s illogical heel turn as the “higher power”
-Endless random name changes
-McMahon’s exploding limo
The list goes on and on…

The bottom line is that mentioning other talent NOT in your promotion just shouldn’t be a big deal, unless you’re doing it literally every week. Given the fact that AEW is still brand-new, and a chunk of their talent has come from WWE (though only roughly 20% of the roster is well-known former WWE talent), it’s logical to do this from time to time.

When ONE COMPANY has had a monopoly over the industry for over 20 years, you’d be hard-pressed NOT to mention their former talent here and there.

I watch Dynamite every week, and have since it debuted in 2019. Out of over 100 episodes under their belt, this doesn’t happen as much as one would think. All of these wrestling “experts” and columnists that claim AEW is talking too much about WWE isn’t really paying attention.

If we’re being honest, the occasional shot or throw to the competition is best for business overall. Vince McMahon would rather have the larger wrestling fan base ONLY watch WWE, and ONLY care about his little corner of the wrestling universe.

If Vince could buy literally all of his competition, including smaller companies like MLW and Impact, I imagine he would. When TK mentions his competition, he is essentially telling the fans “We know you know other companies exist, but we have the hottest product in the industry right now, and we’re not going to insult your intelligence.”

And that’s what this comes down to…

AEW won’t insult your intelligence. This is why they can comment on their competition in a way that doesn’t make them seem desperate for viewership. Any smart wrestling fan that watches that MJF/Punk promo isn’t going to think “Man, they really shouldn’t mention WWE wrestlers” — they’re going to appreciate the context and passion in the segment itself.

It’s OKAY to mention other talent on competitor’s shows here and there. Only the media is making a big deal out of this, when it’s really not. Quite frankly, any smart fan already knows this.