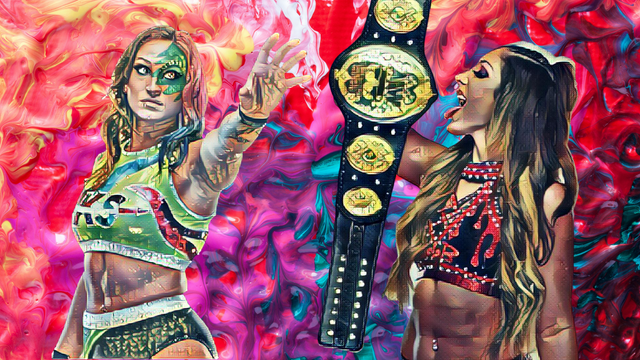 Every month I’ll be checking in on of the underdog of professional wrestling — the AEW Women’s Division.

While the WWE Women’s Division remains overexposed, yet under-booked, the AEW women, if anything, are underexposed and under-booked.

We need to fix this problem.

How do we accomplish this? By keeping tabs and putting the right people on notice. Contrary to popular belief, the powers that be do read these opinion columns from time to time. Unless you’re Vince McMahon. If you’re Vince McMahon, poop jokes are funny and burritos are confusing. He won’t listen to any of us, and never will. But I’m not telling you anything you don’t already know…(R.I.P. Sean O’Haire)

So with that, my report for the women’s division for January, and its current state of being…

Britt Baker is really, really good. However, she’s starting to plateau. A critical mistake has been made within the division where no legitimate challengers remain for D.M.D. anymore — nobody currently available anyway. Her last two title defenses were quick and safe feuds with Tay Conti and Riho — neither of whom were a serious threat.

In 2021, she defeated Hikaru Shida, Nyla Rose, Kris Statlander, Red Velvet, and Ruby Soho. It’s not that any of these women can’t have another crack at the gold, but it’s as if their time has passed in terms of currently building an honest challenger. The only woman on the roster to defeat Baker as of late has been Thunder Rosa; who would be a natural choice to take Britt’s title away from her. However, Rosa is still in a feud with Mercedes Martinez, which should be quite the banger on Rampage this Friday.

In short, Baker hasn’t had a heated feud with anyone probably since Thunder Rosa in early 2021. This is a major problem, as even a diehard like myself is starting to “meh” at Baker’s usual in-ring solo promo schtick (which she still does very well). However, Baker needs some serious competition soon, and fast. With a month until Revolution, I fear another “safe” and non-threatening opponent will be put in place to simply lengthen her title reign. The Women’s World Championship hasn’t felt important in some time, and that’s partially due to no believable threat to Britt — and that’s a booking problem.

That Bitch has been growing on me. At first I shared the same thoughts as many others: she’s too green to hold a title of any kind. Granted, this still may be the be case in some regards, but you can tell that Jade is starting to progress and get better and better in her matches.

Her Rampage bout with Anna Jay was better than expected, and while a squash match with Julia Hart wasn’t anything spectacular, you can tell that Cargill is starting to really come into her own inside a wrestling ring — and this is good.

I can’t say much else here. I look forward to Ms. Cargill improving her craft as the months pass.

You wouldn’t know it, but there are multiple storylines currently ongoing in the division. The fact that you may not know, or have forgotten, is a problem in itself.

Mercedes Martinez vs.  Thunder Rosa will be a fantastic bout, but we don’t really know why they’re beefing, do we? Leyla Hirsch turned heel on Kris Statlander because she felt Kris was too selfish? …and now we haven’t seen anything from this story in two weeks. Serena Deeb turned heel and looks like she’s putting the division on blast — but now we haven’t seen her since January 19th.

Is anyone else catching a pattern, here?

Consistentcy is important, and not only do we not see these storylines play out consistently, they are given little time to do so. In addition, Britt Baker, the world champion, doesn’t even have a feud.

As far as Brandi Rhodes vs. Paige VanZant — this may not be as cringe as one may think. For one, at least Tony Khan isn’t shooting Paige VanZant into the world title picture a la Ronda Rousey. Second, we know Brandi isn’t good in the ring. She’s simply not a fluid wrestler — her moves aren’t believable, and reminds me more of the Diva’s Era style of stiff mechanics.

But she can kick. She wouldn’t have to have a pure wrestling match with VanZant to make it entertaining, but she will have to work on how sawft her kicks and punches look.

On paper, these are all fine storylines — but they aren’t consistent and seem not to serve a larger picture of the women’s division. As it stands, both current champions don’t even have a feud. That’s not good, and really needs to change ASAP.

Unfortunately, a lot of this division is missing…

Yuka Sakazaki is working shows for Tokyo Joshi Pro in Japan right now. Riho and Hikaru Shida are now back home in Japan nursing injuries. Rebel (not Reba) really isn’t a wrestler, and Abadon (26-3 ALL TIME RECORD) hasn’t had one match this year.  The Bunny is just hanging around HFO here and there…

Tay Conti is possibly still in Brazil (based on Sammy’s latest Vlog), we haven’t seen Leva Bates on Dynamite since March of 2020. Julia Hart hasn’t figured out if she’s a pirate or not. Otherwise, she’s had two matches this year and an all-time singles record of 9-9 in AEW.

Anna Jay keeps looking better and better, but doesn’t seem to have anything to do right now. Jamie Hayter is legit one of the most talented women on the roster — yet has slowly faded into the background…

Diamante, Kiera Hogan, KiLynn King, Skye Blue, and Queen Aminata all seem to be stuck in AEW Dark hell. If they’re officially signed with the company, they aren’t listed on the official roster, and they certainly never appear on Dynamite (sans one appearance by Blue).

I feel like the women’s division is equivalent to one of my favorite lines from Office Space:

“What would you say you do here?”

When it’s all said and done, the entirety of the AEW women’s division seems less populated than WWE, and even Impact Wrestling. It shouldn’t feel like the women’s division reminds me of tumbleweeds blowing through an empty ghost town.

Obviously, the division needs to be filled, and the talents that are barely around either need to be let go, or finally utilized. Clear cut future signees include:

Additionally, the “forbidden door” opened so easily for the men, but for some reason, closed for the women. Speaking of Impact Wrestling, Jordynne Grace, Deonna Purazzo, Rosemary, or Su Yung would make excellent crossover matches.

Pitch #1 – Turn Nyla Rose face. She’s actually pretty damn funny, and starred in a comedy show out of Canada a few years back. She has good comedic timing and could benefit from a character change.

Pitch #2 – Pull the trigger on Thunder Rosa as women’s champion. We have a circumstance where more powerful heels exist than faces in this division (Baker, Martinez, Deeb, Brandi, Hirsch, Rose, The Bunny, Ford…). 2022 is a great year for Thunder Rosa to be chased by all of these heels  until she can drop it to the likes of Serena Deeb. (or Hayter?)

Anyone up for an Abadon/Thunder Rosa feud? It books itself.

Pitch #3 – Start pushing Jamie Hayter. If not Thunder Rosa, Jamie Hayter can be the one to dethrone Baker for her women’s championship. There’s even a slow burn storyline as tension once mounted in camp DMD to possibly help set this up. Hayter is solid in the ring, has a great look, and has a good promo — you just wouldn’t know it…

Since I firmly believe Statlander will eventually defeat Cargil for the TBS Championship in the middle of the year (which is well deserved), this leaves open a spot for Hayter.

Hayter is extremely talented. That is all.

Pitch #4 – Two Women’s Matches on Dynamite. I’m going to keep saying this until it happens. Especially if you add in a possible influx of new talent. If TK won’t implement Women’s Tag Team titles to give the ladies at least an extra spot on a Dynamite, then featuring more than one feud (or match) is viable.

I feel like there were strides all throughout 2021, but it’s hard to give its current state a high grade when both champions have no feuds, and nobody really seems to be doing anything.

With any luck, AEW Revolution will feature THREE Women’s matches.

I won’t speculate and fantasy book what those are, but we can do better than a part-time wrestler vs. an MMA fighter. Britt and Jade should preferably be on the card with some sort of high stakes competition involved.

I love AEW. But it continues to be an uphill battle with this division — but it’s a battle I won’t give up on. Expect another report next month, and hopefully, the grade will be a bit higher.