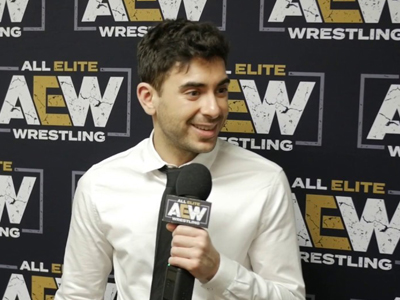 Calm down, Punk fans. It’s not even him that’s the main target of this piece. It’s Tony Khan. At this media scrum, it became clear that he has no control over this situation causing turmoil backstage and he’s the one who came out of this looking bad… AGAIN! What you saw at that media scrum was nothing new. That’s Phil Brooks. That’s CM Punk. That’s what Tony Khan wanted and that’s what he’s getting and finding himself ill-equipped to handle the chaos that is being presented to him as a result.

Yesterday’s press conference began with Punk slamming his dick on the table and calling out the wrestling media. The audio isn’t enough. Go seek out the video on YouTube. Punk sat there angry airing out his frustrations on a lot of the rumors being reported about him being the source of tension in the locker room and in particular the cause of Colt Cabana being demoted to Ring of Honor. He tough-guy’ed the reporters for basically doing their jobs. I mean, sure, you can’t just blindly believe everything you read online, but at the same time where there’s smoke, there’s a fire. These guys DO talk to the dirt sheets (especially in AEW) and it would be irresponsible to ignore these rumors and not ask questions when it seems like every day there’s something new coming out of this company’s locker room.

My favorite part was probably at the end when Punk got butthurt at Byan Alvarez for actually reporting both sides of the story. A fact that Punk has his supporters in the AEW locker room, but there are also people there that don’t like him and wish he was gone. I guess if the sheets only reported on how much people love CM Punk, he wouldn’t have such an issue.

It wasn’t just those lowly dirt sheet writers and podcasters Punk called out. Oh no. It was the executives that work below Tony Khan along with some of the locker room. Punk went as far to list off the EVPs by title and say the company is “run by children” while Tony Khan is sitting right by his side nodding his head and just letting Punk roll. Khan pretty much just sat there in silence. Sipping his coffee and nodding his head. A gesture that could be seen as him throwing his own executives under the bus in order to keep Punk happy or because he was afraid to actually speak up. Apparently, the Young Bucks didn’t take too kindly to this because there are now reports of an altercation between them and Punk after the scrum. Some even call it a melee.

So, what does Tony Khan do? Takes a shot at WWE of course. Nothing to see here at AEW. Not a word about his world champion’s behavior. Instead what really pisses off Tony Khan is that WWE is holding a live Raw on Labor Day!

But WWE performing on Labor Day really burns your ass? This is what you call taking a fake stand, people. Fake. Fucking fake as the day is long. It’s easy for Tony to pretend like he’s some tough leader taking charge when he’s calling out WWE from afar, but when faced with a real issue and his world champion holding the company by the balls sitting 3 feet by his side, Tony Khan sat there with nothing to say. He sat there silent and didn’t do a damn thing. To use an analogy, he’s so worried about the house next door letting their kids stay up late, that he’s completely blind to the fact that his wife is out late again, his daughter is sneaking her boyfriend in her room and his son is smoking pot in the basement. How about you get your own house in order before you start going on profanity-laced rants about WWE doing a show on Labor Day?

I listened to Tony Khan on Dave Melter’s show over the weekend and Dave keeps making reference to CM Punk having issues with talent being like Bret Hart and Shawn Michaels in 1997 and how this is such a good thing and can only mean great promos and matches going forward. I see things a little differently. These issues with Punk don’t remind me of Bret and Shawn, it reminds me more of Hulk Hogan and Dixie Carter in TNA. You know, Hogan coming in with big expectations, making big money, grasping the promotion by the balls, doing whatever he wanted and causing issues backstage while the owner sat there and defended him at every turn while things collapsed around her.

That’s what I see. Once again Tony Khan is Dixie Carter and CM Punk is pretty much a younger Hulk Hogan with about 1/120th the star power and mainstream appeal. The only big difference is Hogan was smarter and more sneaky with his politics and Punk is more obvious and really, if you were Punk why wouldn’t you be obvious? What’s Tony Khan going to do? Fucking nothing. That’s what. He’s going to sit there, nod, be quiet, and when he does talk he’s going to put over what a big star Punk is and attribute the ratings and million-dollar gate all to him.

If Tony were a competent leader and not just some e-Fed fantasy booker, he should have cut CM Punk off LONG before he started rolling and burying the company’s executives. Tony should have cut him off and said “Look, its on me. I’m the owner. I need to do better. Let’s move on from this now and discuss the show that just took place.” Instead, he just sat there and let Punk go and never once had the balls to step in and defend his executives to Punk and to the public. It’s all about making Punk happy. So, is anyone even talking about All Out today?  No.  Leaders and good managers see these issues forming and nip them in the bud before they become huge problems for the company. Instead, Tony Khan just sits there scared and allows Punk to have a platform to pretty much say whatever he wants without consequence to him.

Since Tony likes to make constant reference to his involvement in the real sports world, being the son of the owner of the NFL’s Jacksonville Jaguars, how would he feel if one day the starting quarterback of the team just took to the press and started calling out members of the team and front office by name? On most teams that would get a player fined, suspended or perhaps even released or traded. In AEW though? Nope. Just keep telling the rumor-hungry dirt sheets how much the company is run by children and that members of the locker room are immature and don’t want to listen to anyone… (I know, ironic coming from him.)

Take a look at this picture from the scrum.

It sure does sum things up. Tony Khan looks like the face of a guy who found his first love, he was all giddy at first and now she’s telling him that she hates his friends and if they’re going to continue to be together then he’s going to have to cut them out of his life.

I know in my last column I said the honeymoon has been clearly over for a while now, but here it almost felt like a couple when the word “divorce” comes up for the first time. It’s Punk’s way or no way and the owner of the company is fine with just sitting there nodding in silence. Oh, but don’t you run a wrestling show on Labor Day! Funny, I wonder if Tony Khan was that passionate about the person making minimum wage who poured his coffee this morning or the crew working hard at whatever dump the Jaguars play at getting things ready for football season starting soon so his little multi-millionaires can work 18 days a year and then bitch about how they don’t get enough in the off-season and threaten a strike.

Thanks again for reading, everyone. AEW needs to get this shit under control. I feel like they can’t live with Punk and they can’t live without him either. Yeah, he’s generated some needed interest for the company, but look at things now a year later. Ratings are basically the same or even a little lower and this harmonious locker room has now been divided into factions. Guys are speaking out about management. Asking for their release. Also, the year started with a certain EVP, Cody Rhodes, exiting the company to work for WWE again.

At the time Cody’s exit as an executive in AEW to work for WWE as a talent seemed like a huge gamble, but now it seems like the smartest thing a wrestler of his generation has ever done. I’m sure he’s watching this dumpster fire from afar and breathing a sigh of relief.

That’s all for this edition of Planet Kayfabe. Take care and God bless. Enjoy your Labor Day. I hope Tony Khan doesn’t get too mad at NoDQ that I spent part of my day writing. Don’t worry, spaz. It was my choice and my pleasure.

See you all next time.