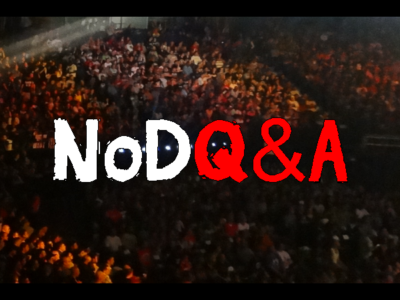 Welcome to NoDQ&A! I first started this series in 2010 and it was transitioned to video in 2011. I decided to bring back the series in text format so let’s get to your questions…

Allen Dempsey: “Will the Undertaker wrestle one more time at Wrestlemania 37?”

Doubtful. If Undertaker was going to wrestle again, I believe WWE would have announced something by now. As Undertaker has stated, he would need months of preparation to train for a match. However, I would not rule out the possibility of Undertaker appearing at Wrestlemania as a surprise and giving someone a choke slam since that technically wouldn’t be a match. I still think there is a reasonable chance Undertaker will wrestle again when full-capacity crowds are back but it is unlikely to be anytime soon.

Bobby Dean: “What is bad ass in wwe today? In my opinion it hasn’t been bad ass in a long time. Been a long time fan of nodq since 2002 keep up the great work.”

There isn’t a lot and that is definitely an issue as far as attracting a younger audience goes. As a horror fan, I feel that The Fiend has a “badass” look although the character doesn’t seem to be everyone’s cup of tea. On the flip side, Bobby Lashley has been doing very well as being a reality-based asskicker. I’ll also say that Roman Reigns has also been doing a great job with the “tribal chief” gimmick.

Caleb Jacobs: “Now that Eric Bischoff is going into the hall of fame do you think it’s now a matter of time that paul heyman will go in too?”

Absolutely. It’s not a matter of if but a matter of when. I feel like with Heyman being a heel character on television right now, it might be best to wait until Roman Reigns’ heel run comes to an end. I would not be shocked to see Heyman enter the Hall of Fame within the next few years.

Michael in Lusk, Wyoming: “I’ve been a huge fan of your videos for a few years now. Keep it up. My question is Why is Raw and Smackdown still using the Thunderdome for their tapings. In my opinion it’s too distracting for me to watch a match while there’s all the video screens facing the hard camera. If you were in charge of WWE how would u fix this issue?”

WWE is being very cautious in regards to the Covid-19 pandemic and I think it’s the right move. I totally understand the frustrations about the Thunderdome concept. I had mixed feelings about it at first but I did get used to the concept. With that being said, it doesn’t replace having a live audience and hopefully we will get back to some sense of normalcy soon. Patience is the key here. WWE could perhaps develop a hybrid format with a mix of Thunderdome screens and fans although that doesn’t appear to be happening anytime soon.

Jerry Slaugher: “Hey, long time listener first time caller… Post Mania this year: if the champions retain, would you rather see a (wishful thinking) returning Lesnar in a more physical feud with Lashley or a storyline driven rivalry with Reigns and Heyman?”

I’m not sure I can pick one over the other because I’d like to see both happen. I suppose if I had to make a choice, I would pick the Bobby Lashley match just because we haven’t seen it before. However, I’d very intrigued in seeing a babyface Brock Lesnar challenging a heel Roman Reigns with Paul Heyman having to choose a side.

Michael Wayne: “What are your favorite Wrestlemania theme songs?”

The Limp Bizkit songs “My Way” for Wrestlemania 17 and “Crack Addict” for Wrestlemania 19 have to be at the top for me. I also love those Wrestlemania PPV events so maybe there is a bias. Basically, any song with loud guitars and people sounding angry work well for wrestling shows. “Ladies and Gentlemen” by Saliva for Wrestlemania 23 is another song that I felt fit the atmosphere of the event.

Colin Andrew: “Besides the 1998 KOTR Hell In A Cell Match between Foley and Taker, what would you consider to be the best match they had together?”

I would go with the “Revenge of the Taker” In Your House match from a year prior in April 1997. That was a strong WWE Title defense for The Undertaker and I enjoyed the angle with Paul Bearer getting his face burned by Undertaker. Of course, that incident would set up the eventual arrival of Kane.

Thanks for reading! E-mail me at nodqmisc@gmail.com to send in questions.