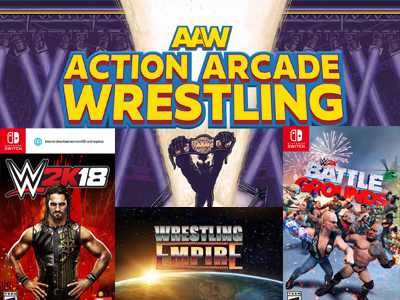 As a FYI for the rest of the year, I have one more column in store for you before I go back to the Retirement Home for Internet Wrestling Columnists: The 2023 Predictions Column. Just like last year, I’ll review my 2022 Predictions, do a mini-Year in Review, and then provide my top 15 2023 Predictions. I’ve been working on this column all month and it should be fire when it is posted on 12/31/2022.

Now, for today’s topic… I’m a huge Nintendo fanboy, as I’ve been conquering every Mario and Zelda game for the system while owning people in the Rocket League arenas and now lately on the field of Fortnite. However, NoDQ is a Pro Wrestling website and I just wanted to perform a countdown of the TOP PRO WRESTLING video games on the Nintendo Switch. While not quite top tier wrestling games, as there is a real quality issue, there is a decent amount of variety for you to choose a possible game for your wrestling video game “fix”.

I have reviewed several of these previously and I actually attempt to painfully buy each one in hopes of getting something decent.

As a heads-up, this list is MY OPINION… You may have different gamer tastes than me and that’s cool… Join the conversation with professionally listed opinions below in our Comments section.

Keep in mind that at the time I am writing this, AEW Fight Forever has yet to release… Oh, and I also refuse to buy any of the NEO GEO or Arcade Archives games. Those are hot garbage!

#6 – Chiki-Chiki Boxy Pro Wrestling
Have you ever played M.U.S.C.L.E. for the NES? If not, well, this game is the modern version of that awful game. Just a slippery pro wrestling game with very loose controls and the usual repetitive moveset. I’ve fallen for many “Boxy” games on the Nintendo Switch and only the Rugby game is worthwhile. This one is on sale often, so if you’re looking for something “awfully bad”, this is the one. Otherwise, go find MUSCLE for the NES and it is practically the same game.

#5 – WWE 2K18
Biggest letdown EVER for me in video gaming. WWE had a real opportunity to hook a new audience, but instead, they let 2K shove out an awful port of WWE2K18 to Nintendo Switch owners. It’s like 2K Sports didn’t realize that the Nintendo Switch was weaker in power than Playstation and X-Box, and just tried to force a port of the game onto the Switch without any adjustments. Game performs poorly, as it’s incredibly slow and glitchy. Complete embarrassment and it made me hesitant on buying anything from 2K Sports in the future, especially for the Switch.

#4 – RetroMania Wrestling
Many people love this game, I didn’t… I didn’t quite like its grandfather, WWE Wrestlefest, either. Just the repetitive forced grappling system made the gameplay feel very dated to me, though I really loved the roster of wrestlers on this game. It felt like it was a step behind the SNES WWE games, let alone what should be expected in this modern era. Then again, it was meant to be “retro”. Just missed the mark with me, though I know many online who enjoy it. It’s worth a try if it is on-sale, as the roster of wrestlers is remarkable.

#3 – WWE Battlegrounds
This is more of an arcade kind of beat-em-up than a Pro Wrestling game. Reminds me of the Legends of Wrestlemania game-style, with wrestlers hitting absurd moves that you never saw them hit on television before. Where this game does shine is by playing with friends in the same room… But where it doesn’t is the micro-transactions to unlock a significant portion of the roster. This game will bleed you dry if you attempt to 100% this game and unlock everyone and everything. The gameplay just doesn’t represent pro wrestling accurately to want to play that much of it.

#2 – Wrestling Empire
Imagine the THQ Nintendo 64 games, but with glitches and sometimes unresponsive gameplay. That is Wrestling Empire, baby, but the ability to customize your matches and the storyline mode carry this game. I always enjoy placing explosive weapons in a ring full of wrestlers and letting complete chaos take over the match. This game has a lot of insanity packed into the game, which creates replay value beyond looking for a good in-ring product. The options make this game FUN beyond strictly being a wrasslin’ game.

#1 – Action Arcade Wrestling
The best of the best on the Nintendo Switch. While a 2D wrestling game, just solid action and simple, easy to pick-up controls. Gameplay options are basic but fun to playthrough. The real bonus of this game, however, is the Create-a-Wrestler option and the online link-up to download other people’s creations. This game has incredible created wrestlers and you can just load up on your downloads to create a dream roster of wrestlers. Honestly, I may have spent more time downloading awesome created wrestlers than playing the actual game itself, but trust me here, AAW is the “cream of the crop” in a terrible field of pro wrestling games.

Hopefully, AEW’s Fight Forever game is the REAL DEAL and easily takes the #1 spot from this list. That said, if 2K Sports would create a scaled down version of WWE 2K22 for the Nintendo Switch, I’d be excited for that as well. Hell, porting WWE Wrestlemania 2000 or No Mercy onto the Nintendo 64 online library would be awesome, too.

AEW has a real shot to show-up the WWE on video games, particularly on the Nintendo Switch which has 2 lackluster games from 2K. WWE 2K18 was a complete abomination of a game and Battlegrounds was an arcade fighter with micro-transactions.