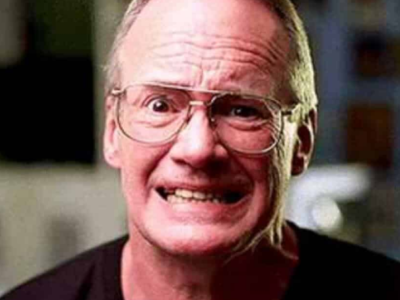 Jim Cornette is a hypocritical piece of trash. But don’t take my word for it. Just run down the list of his antiquated “get off my lawn” moments over the years…

-Made a racist statement during a match on NWA Powerrr that later led him to resign.
-Made a homophobic slur against Sonny Kiss.
-Made a bigoted statement against Marko Stunt for his size.
-His awful take on how AEW should be using Nyla Rose.
-A noted history of unnecessarily berating talent.
-Insert more I am likely missing…

What’s funny is that he’s a self-proclaimed liberal atheist. So am I! But I would never utter half the crap that spills out of his mouth. One thing is clear about Jim Cornette:

He doesn’t know who he is, he can’t keep up in the modern wrestling era, and quite frankly, needs to shut the fuck up.

But this isn’t what the column is about…

Every Wrestler is Exactly the Same…

This column is on recent statements made about how to improve the WWE product. Remember, this is the same guy that many WWE-simps follow as a way to vicariously hate on AEW, and other “fucking outlaw mudshow bullshit”.

And here’s the thing about his “advice” to Vince McMahon: HE’S RIGHT… Let’s view the quotes from his latest podcast in proper context:

“Not only does nobody believe this shit anymore, they don’t believe the people involved in this shit. And the programming that they are putting on in the WWE with the people that nobody believes in or cares about is also boring. It’s homogenized and pasteurized and cleaned up and scrubbed up and all the talent, except the few that stand out, move the same way and talk the same way because they are written for and trained the same way.”

You ask any non-WWE fan that used to watch the product religiously because there was no other mainstream option and this is what we’re going to point to. It all looks the fucking same. Everyone works a match the same way, and after seeing Wrestler A versus Wrestler B for the fourth straight week on Raw, it gets really old, boring, and repetitive. So then you question why the hell you’re even watching to begin with. ‘Why am I watching this crap?’

The creative sucks because it’s not anything that anybody gives a shit about. It’s these hokey fucking entertainment stories. All you need to give wrestlers is a believable reason to be made at each other. You don’t need to have 16 writers concocting a goddamn feature-length motion picture backstory. Just make it something that people can get into, then let them go out and say some shit and do some shit on their own like we used to, Vince.”

There is a simplicity in simply having two wrestlers having a go because one shit-talked the other. It may lead to bigger things — it may not — but there’s never a need to overcomplicate it. Again, Cornette is spot-on. Furthermore, talent should be given free reign to write and deliver their own promos with minimal direction; not try to memorize what amounts to a script from a B-Movie.

Answering to Shareholders Over the Fanbase

“They don’t care about what wrestling fans want to see, and they somewhat consider themselves the only game in town, which they used to be and still are on a worldwide basis, and they are not going to change it. To change it would offend some sponsors and was real enough that someone got upset or someone said something they shouldn’t say.”

Vince McMahon would be more upset that he angered a shareholder rather than an actual fan of his product. WWE is a publicly traded company; he sort of has to answer to the shareholders, advertisers and TV executives, right?

Yet we’re getting an honest wrestling product out of this how?

“It would be to fire three-quarters of the creative team and just let the boys find some guys that can do their own shit and just let them do it. But they [WWE] don’t want to do any of that stuff that would make it easier for wrestling fans to watch. They have, I guess, cornered the market on the amount of people that are going to watch boring sports entertainment, and they are serving those people well.”

What strikes me as amusing is a chunk of the WWE fanboys that try to hammer on what AEW is doing “wrong” is citing Cornette’s criticism as a source. But Cornette would say (without batting an eye) that the very WWE product you hold dear fucking SUCKS.

WWE has cornered the market on those who prefer to watch boring sports entertainment. If you fall into this class, I can’t help you, kid. There’s more wrestling beyond WWE out there, and Cornette even knows this.

Why Jim Cornette is a Hypocrite

I’ve painted a picture, let’s put it in a frame.

Nearly EVERY criticism of WWE is something you don’t see in AEW — a product he still critiques heavily to this day.

-AEW offers different wrestling styles and not a watered-down version of the same in-ring formula that everyone has to follow.
-Most AEW storylines are extremely simplistic in nature. Two talents have beef — let them fight. Easy. Rarely will you get “hokey”, sans a few goofy and fun characters.
-Tony Khan has been pretty good about giving fans what they want. More wrestling, less bullshit. No treating the fans like they’re ignorant.
-AEW has no shareholders to answer to. WarnerMedia is VERY HAPPY with the weekly ratings for Dynamite and Rampage, and that’s all that matters.

AEW is far from perfect — but he still bashes AEW at nearly every opportunity. Why?

And a modern successful promotion that exists outside of WWE that he isn’t directly involved in, grinds his fucking gears. Cornette is such a control freak, and has such a “god” complex, that he would rather spend his time shitting on modern pro wrestling than giving any praise to the scene.

He’s an old dog that COULD learn new tricks, but would rather not.

While he’s a legit encyclopedia of wrestling knowledge, his time has simply passed. Jim Cornette is a relic, because he turned himself into one — a parody of himself — the angry former wrestling booker that shakes his fist at anything new and moderately bold.

It’s a sad way to live. Cornette isn’t stupid; in fact, he generally has a smart wrestling mind — but he’s bitter. And that clearly gets in the way.

It’s not just AEW. Many promotions around the world are booking in the exact same styles Cornette speaks highly of — but with a modern twist. New Japan, MLW, Ring of Honor — AEW isn’t alone in how modern wrestling is booked that isn’t a content-hog/sports entertainment vomit factory like WWE.

It’s time for Jim Cornette to shut up. I haven’t listened to his commentary on the one-hour Danielson/Page INSTANT CLASSIC from Dynamite, but something tells me he’ll find something wrong with it.

Those past their prime often do.

Next Week: Why Eric Bischoff should shut the fuck up.