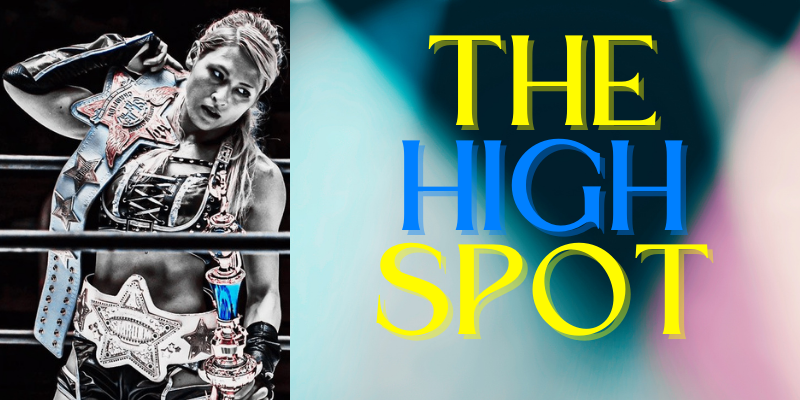 Anyone can identify a problem. Offering a solution is a different story. Just yesterday I made the very valid point that a level of gender inequality exists in AEW.  I am heavily invested in AEW, and will continue such investment.

However, Tony Khan doesn’t seem to be terribly invested in his own women’s division. While defenders on social media point out the various (half-ass) storylines that exist in the division, it’s easy to point out how little exposure they get on a weekly basis, if at all.

This further cements the idea that Tony Khan simply doesn’t give a shit about the division.

Truth be told, there are simply no more excuses for this lackluster booking. So instead of just fantasy armchair booking the whole lot, I plan to offer booking concepts over fantasy matchups.

I honestly don’t know why it has come to this, but LFG…

Unfortunately, a wrestling college to get a degree in booking doesn’t exist. I don’t want to ever reveal my true identity because the internet can be a dark place. Please respect my privacy.

But if counts for anything:

We now resume this featured article…

One of the most brain-dead easy ways to get fans to care about a wrestler is to put them in a faction. This, by association, features them more than you may realize. Take “Powerhouse” Will Hobbs for example: He was simply the muscle for Team Taz well over a year ago. Through exposure, training, and getting ripped, Hobbs is now seen as a potential future main eventer in AEW, and is involved in a major feud.

To a larger extent, this has worked with Wardlow. After turning on MJF, he is slowly becoming one of the biggest babyfaces of the company. Many great talents over the decades have had their start this way — hanging out in the background, perfecting their craft, until fans start to ask “who is this dude?”

Now repeat this for the women.

I don’t really count Jamie Hayter‘s possible slow burn turn on Baker and Rebel when Baker hasn’t even been on television in weeks, and Rebel isn’t really a wrestler.

I’m talking about an actual faction.

Zero women’s factions truly exist in AEW, and that’s a problem. The truth is that creating factions wouldn’t be hard to do. Just take a look at Stardom over in Japan. In concept, this isn’t difficult to simply create a few.

Even you can create your own! Whether it’s Professor Serena Deeb and a few young heels to mold, or adding The Bunny & Penelope Ford to Britt Baker‘s faction of bad-ass bitches, there’s no wrong answer here. Creating factions by its very nature helps evolve characters and do some slow-burn storytelling. The women’s division doesn’t even need much — just a couple, really.

But what this also does is instantly highlight those who aren’t in a faction as standouts. Names like Jade Cargill, Kris Statlander, Toni Storm, and Abadon should be featured attractions; as well as current AEW women’s champion Thunder Rosa.

These are talents that have enough credibility, natural starpower, and/or build to get over simply being who they are. If you haven’t noticed, the crowd always gives a nice pop for any Kris Statlander or Britt Baker appearance. While some haters may not admit it, the crowd pops for Jade Cargil as well.  She’s that bitch, and she’s only getting better and better in the ring…

Fans also get the chance to root for their favorite stables and alliances.

Factions work for a reason. In the women’s division it’s no different. Build your teams, develop your characters in the background while veterans lead, and highlight your featured attractions.

In AEW’s history there have been a lot of intricate stories. We dug into MJF’s past in his feud with C.M. Punk, Omega and Page had history going back half a decade, and even Jericho’s rift with Santana, Ortiz, and Eddie Kingston is well documented.

There is a clear cut history with men’s wrestlers which leads to better storytelling. When it comes to AEW women, we simply don’t get that.

Hikaru Shida and Serena Deeb have had beef for a while, but for what real reason? Just because Deeb randomly turned heel on Shida post-match with no build or history at all? When Leyla Hirsch turned on Kris Statander and Red Velvet, was there a boiling point reason given for her attitude change?

The only mention-worthy feud over the last year has been the off-again, on-again beef between Britt Baker and Thunder Rosa. But let’s face it; most women’s feud are the equivalent of this:

(match is announced for next PPV)

Simplicity is fine, but this isn’t simple, it’s lazy.

Characters drive motives, and motives drive stories. When you don’t feature your women at all, nor give them the room to develop any character, there will never be substantial motives to drive a well-told story. Just the cliché ‘I don’t like you because of reasons, so now we’re fighting.’

Do better, Tony. Or better yet, hire a legitimate writer to your squad.

As mentioned in the past, this doesn’t have to be a weekly requirement. But maybe twice a month can we just get more than one match on the flagship show? The only way women’s wrestling gets over on higher level is if they’re exposed more to the viewing audience at home.

This extra match is the culmination of the above two points.

Do you know what we rarely if ever see from AEW women on Dynamite?

Nobody knows it, but Jamie Hayter is great on the mic. Imagine a scenario where her and Toni Storm are interviewed by Tony Schiavone in the middle of the ring to further a potential feud. Imagine if Jade Cargill were present in the announcers booth for a match involving Marina Shafir, or a future opponent (Athena, Kris Statlander, Abadon?).

Call me crazy, but here’s an idea:

Is your mind not blown?

No, of course it’s not. Because they already do this with the men’s division ALL THE TIME. Keep in mind that even giving the ladies 30 minutes per Dynamite is only 25% of the show compared to men.

We’re not asking for much…

Find a Head Writer for the Women’s Division

This is a short and sweet one. Khan has brought forth some really great ideas over the years — but he can’t do it all.

I know that “writers” don’t necessarily exist in AEW, but having a creative mind head the division in terms of story creation and character building is key here. Just give that person 30 minutes a week (for Dynamite) to work with, and I guarantee you’ll see a less fragmented, and forward-moving division.

Something has to light the fuse on the women’s side, and this has nothing to do with the talent. A new direction needs to be forged, and forged soon.

The Gender Inequality is Real

Let’s face it; men are booked much differently than women in AEW; perhaps in WWE as well, but I don’t watch that product, so I won’t comment. But from featured in-ring promos, to multi-wrestler matches, to a wrestler at the booth — there’s a clear trust put into the men’s side of the promotion.

Is that it? Does Tony Khan just not trust his own women’s talent?

More time, exposure, and thought, is given to men’s wrestling in AEW. While I would love for a Stardom-like all-women’s promotion to exist on a major network, that doesn’t seem to be happening anytime soon.

Hell, I would marvel at the idea of an AEW all-women’s product as a lead-in to Rampage on Friday nights. Give the ladies an hour on TNT at 9/8c and see what they can do. I know it runs up against Smackdown, but it would still pull in better ratings than TNT’s random movie of the night.

Who watches edited movies on TV anyway? How can you stand commercial breaks? I digress…

If there’s any true takeaway from this article is that AEW women simply need more exposure on national television. Remember the #GiveDivasaChance hashtag in 2015 and how that led to a movement within the WWE women’s division?

Do we have to repeat that here? AEW is already a great product, but as mentioned, their women’s division is the Achilles heel. It doesn’t have to be.

I don’t buy that two hours isn’t enough time. I see no reason TK can’t carve out an extra 7-10 minutes for another TV match, or an important segment to highlight more of the division. Yes, this means leaving a men’s segment off, rewriting it, or saving it for Rampage.

This is totally okay by me. If 30 minutes were given for the women’s division every week, that’s still only 25% of the entire show compared to the time the men get. This is doable, and should be strived for.

In conclusion, I’m not going to let up. Women’s wrestling fans will not let up, and this should go for the WWE product as well if it’s also in the same shape. There are tons of great women’s talent on these rosters, but there’s no excuse for poor and lazy booking.