About a year ago I made a suggestion in one of my articles that AEW do a women’s #1 contender’s tournament. This was to ensure that infant division could get over as much talent as possible.

A week or so later, AEW announced a women’s tournament.

This probably wasn’t my doing, but hey, why not try this again? To paraphrase Bernie Sanders, “I am once again asking for your booking support.”

The women’s tournament brought us Maki Itoh, but not a whole lot else. In fact, it was largely forgettable. The women’s tag team tournament a year beforehand brought us Diamante and Ivelisse as medal winners, but Ivelisse isn’t even working dates for AEW anymore as is. Diamante, while impressive in a win over Big Swole in AEW Dark, hasn’t seen Dynamite in some time.

Unfortunately, we still haven’t seen much from the AEW women, and unless you watch Dark and Elevation, you’re probably missing a lot. Kris Statlander & Tay Conti vs. The Bunny and Madi Wrenknowski was a great match that was Dynamite worthy — but lost in the shuffle of this week’s Elevation.

Aside from Britt Baker, there isn’t much to be excited about with this division if you’re only watching Dynamite, and that’s a problem.

The talent is there. However, the needed exposure is not. 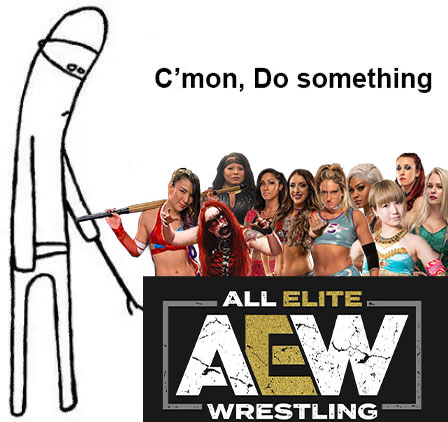 AEW Rampage is on the horizon, and the WWE women’s division (with the exception of NXT) is mostly hot garbage right now. Nikki A.S.H. can’t even properly get over with a live crowd, and we all know she’ll eventually fall to Charlotte Wins Lol sooner than later. She’s nothing more than a cog in a bigger picture to bring Becky Lynch back, possibly before Summerslam. Bianca Belair has had a decent run as Smackdown women’s champion, but not much else is happening with the women on the blue brand. Don’t even get me started on the poorly booked women’s tag team division and the mess they’ve created with Alexa Bliss…

With loads of talent not being used, there is one thing I, as a long-time women’s wrestling fan, can ask from TK and KO: Women’s Tag Team Championships, and a tournament to boot (a good one)

Please excuse my fantasy booking, but this is the next logical step for AEW women. The division is too big for everyone to be represented properly on Dynamite. While I’m skeptical of a late Friday night slot for Rampage, it’s better than nothing, and taking advantage of this timeslot for more women’s action is a plus. I would hope to see more exposure for the division on both Dynamite and Rampage.

The question is, are there 16 competitors to fill out a binge-worthy women’s tag team tournament?

These women will not be teaming with anyone. Either they just don’t fit the mold of a tag team wrestler, or they are clearly in line for something more than a tag team championship. These competitors include: (*=unsigned, but recurring wrestlers)

(note: Some will be brought up from Dark/Elevation)

-Leyla Hirsch & Tay Conti
Anna Jay is still out from injury, so the once promising team of Tay and Anna is on hold. Enter Leyla Hirsch, who is on the rise in AEW. The combination of Leyla’s grappling ability mixed with Conti’s striking ability is a satisfying 1-2 punch. Fans can easily get behind both competitors, and they would pose a serious threat for championship gold.

-Emi Sakura & Yuka Sakazaki
It’s not just that these two ladies are Japanese, but they both bring tons of infectious high energy to a live crowd. They have worked together many times prior overseas, and their styles compliment each other perfectly in tag team action. While Sakura trained Riho and would seem to be an obvious choice for a pairing, Riho stands alone much better as a singles competitor.

-Big Swole & Red Velvet
Again, we’re not doing the “put these two together because they’re both black/Japanese” — but these two have been a legitimate pairing on episodes of Dark and Elevation already. Usually accompanied by KiLynn King, both are very capable of great work in the ring.

-Abadon & The Bunny
While Abadon likely works better alone, it’s hard not to give this pairing a try. Both present pariahs in their gimmicks, and Allie (The Bunny) has enough skill on the mic to speak for both of of them. Abadon doesn’t lose, and is 12-1 in 2021.  She simply deserves more. This is a match made in hell, and these two would make fine potential tag team champions.

-Ashley Vox & Delmi Exo (Sea Stars)*
These real life sisters have made appearances on AEW, and would bring legitimacy to the tag division. They have worked a match as recent as July 16th, and have the experience to give the new division a much needed boost. While Vox COULD team with real-life partner Leyla Hirsch, the pairing wouldn’t really fit in regards to their characters.

-Diamante* & Kiera Hogan*
Kiera Hogan has recently left Impact Wrestling, and it looks like she needs a new home. Enter Diamante, who lost her tag team partner in Ivelisse a while ago. Not only do these two team up in the ring on the independent scene (former WOW tag team champions as Fire & Adrenaline), but like Hirsch and Vox, they are real-life partners. These two would be (pun intended) dynamite together in tag team competition. Not only that, but Vicki Guerrero is looking to create her own women’s stable, and teamed up with Nyla Rose as uber heels, this just fits.

-Penelope Ford & Melanie Cruise (Mel)
Remember Mel? I would understand if you didn’t. Her only AEW glory has come in form of a shaved head in a dropped angle with Brandi Rhodes and the failed Nightmare Collective. However, Mel, (Melanie Cruise) is a 12-year veteran and can actually go. Pair her with Penelope Ford, who doesn’t really have a gimmick aside from being a “super bad girl”, and these two work — for a first round loss — but HEY, you can’t win them all, right? While Ford’s real-life BFF Allie would be a somewhat logical choice, the characters do not line up for a team.

-Julia Hart* & Leva Bates
How could you not want these two to team up? The librarian teams up with the cheerleader in a quest for tag team gold? Having a veteran in Bates team up with Hart (who has tons of potential) would be advantageous for all parities involved.

So who wins? As much as I love the team of Hart and Bates, they fall short to Diamante and Kiera Hogan in the first round. Abadon & The Bunny pick up a win over Sea Stars, and Emi & Yuka take out Ford and Cruise. To finish out the first round, Swole and Red Velvet barely survive Hirsch and Conti in the best match of the first round.

Conti and Hirsch are cemented as future competitors in the division.

In second round action, Big Swole and Red Velvet pick up an upset over Abadon and The Bunny, with Allie taking the pin. (we need to keep Abadon looking strong and dead) Diamante and Hogan picks up what could be considered an upset over Emi and Yuka advancing to the finals.

The the finals, Diamante & Hogan defeat Big Swole and Red Velvet to become the FIRST AEW Women’s Tag Team Champions. They are much better than people think and they remain off of everyone’s radars. Yes, these two wrestlers that technically aren’t even signed with the company — but this is fantasy armchair booking, you know.

The Talent Is There

You may have booked the tournament differently, with different combinations and winners. That’s perfectly fine, but the point is that the talent is there. AEW have slowly built a respectable women’s division that has enough depth and pockets to build not only a credible singles division, but a badass tag team division.

Vicki Guerrero mentioned that she would like to see Ruby Soho (Ruby Riott) in AEW and that would make a fantastic addition to the roster. While Britt Baker versus Thunder Rosa likely to take place at All Out in September, I really hope Khan takes the women’s title match in another direction for AEW’s biggest PPV of the year. I would love to see a 4-way akin to the original All In event in 2018. (Britt Baker vs. Tessa Blanchard vs. Chelsea Green vs. Madison Rayne)

Granted, I don’t see Tessa Blanchard in AEW anytime soon, but featuring a match between Baker taking on Thunder Rosa, Kris Statlander and Jade Cargill would be an absolute banger of a match. Throw in a women’s tag match and suddenly you’re rivaling what is a regressing WWE women’s division.

With live crowds back, now is the time to give a giant push to this division. Let’s do this, and do this now.