As someone who has studied film (in and out of college), lighting is a bigger deal than one would think…

But what is it about lighting for major events that can create two unique identities for the same type of product? On the subconscious level, how much does lighting affect the viewer on how they enjoy the actual in-ring product?

First, let’s take a look at the following picture: 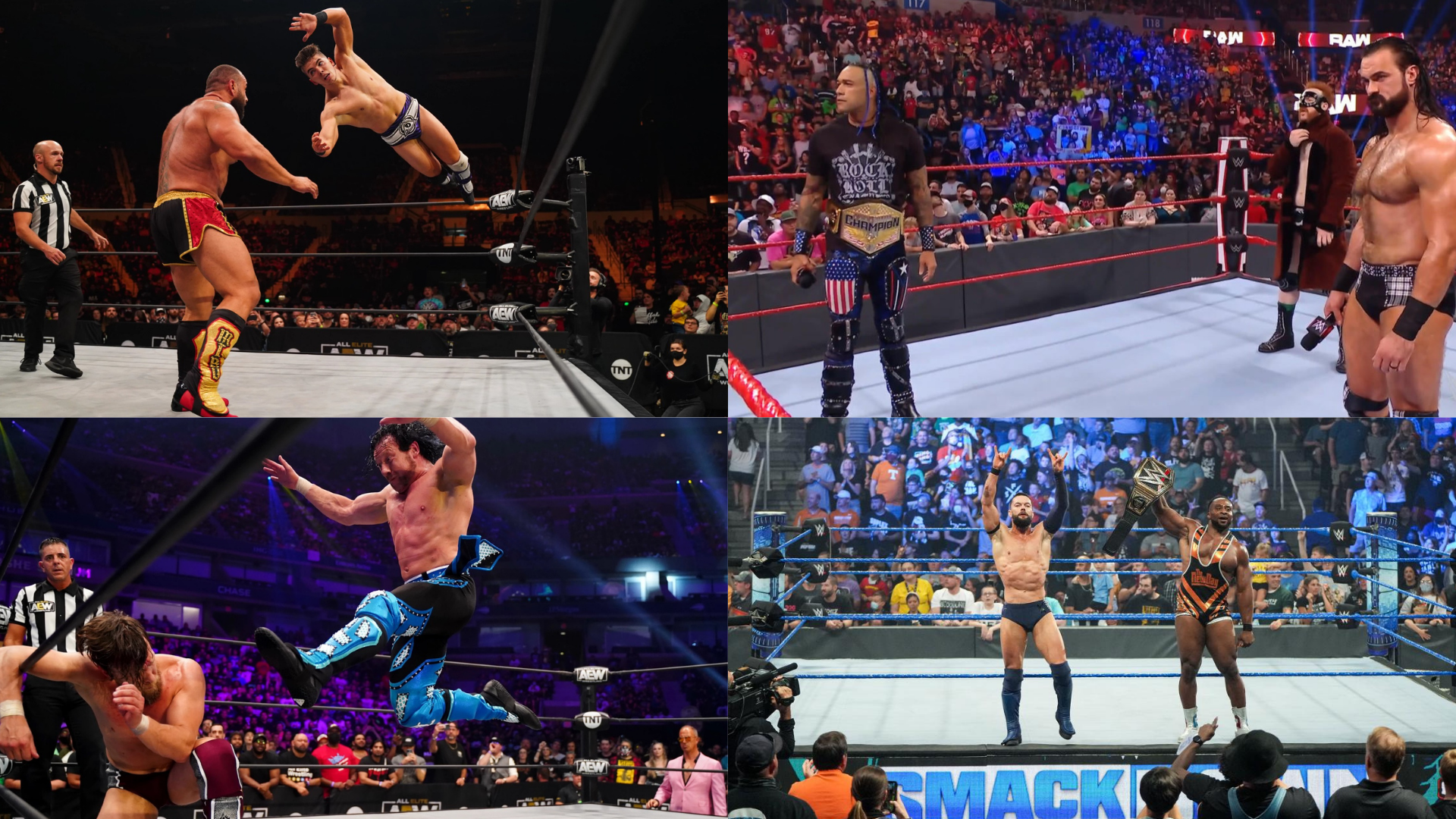 Do you notice anything different? Of course you do — the lighting on the left (AEW) is darker than the lighting on the right (WWE). Have you ever noticed the lighting of MMA and boxing events? The background is lit much darker. This can be seen in similar fashion with many promotions in Japan, especially if you look at New Japan and Stardom.

The focus is what’s going on in the ring. Hence, dim the audience, highlight the ring.

Let’s take a look at two aesthetics from the same company, but years apart… 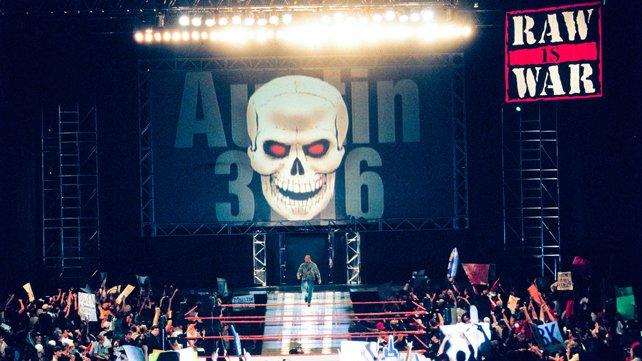 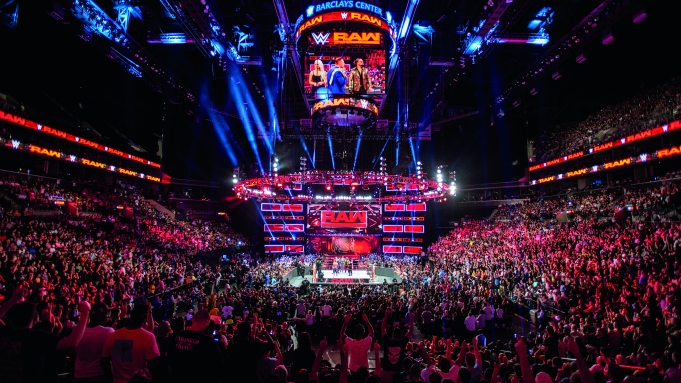 Now I know high definition television brought new set designs and an urge to upgrade the lighting for a more visually pleasing and bright HD experience. But has that come at a cost?

If we take a look at AEW, we see a pattern… 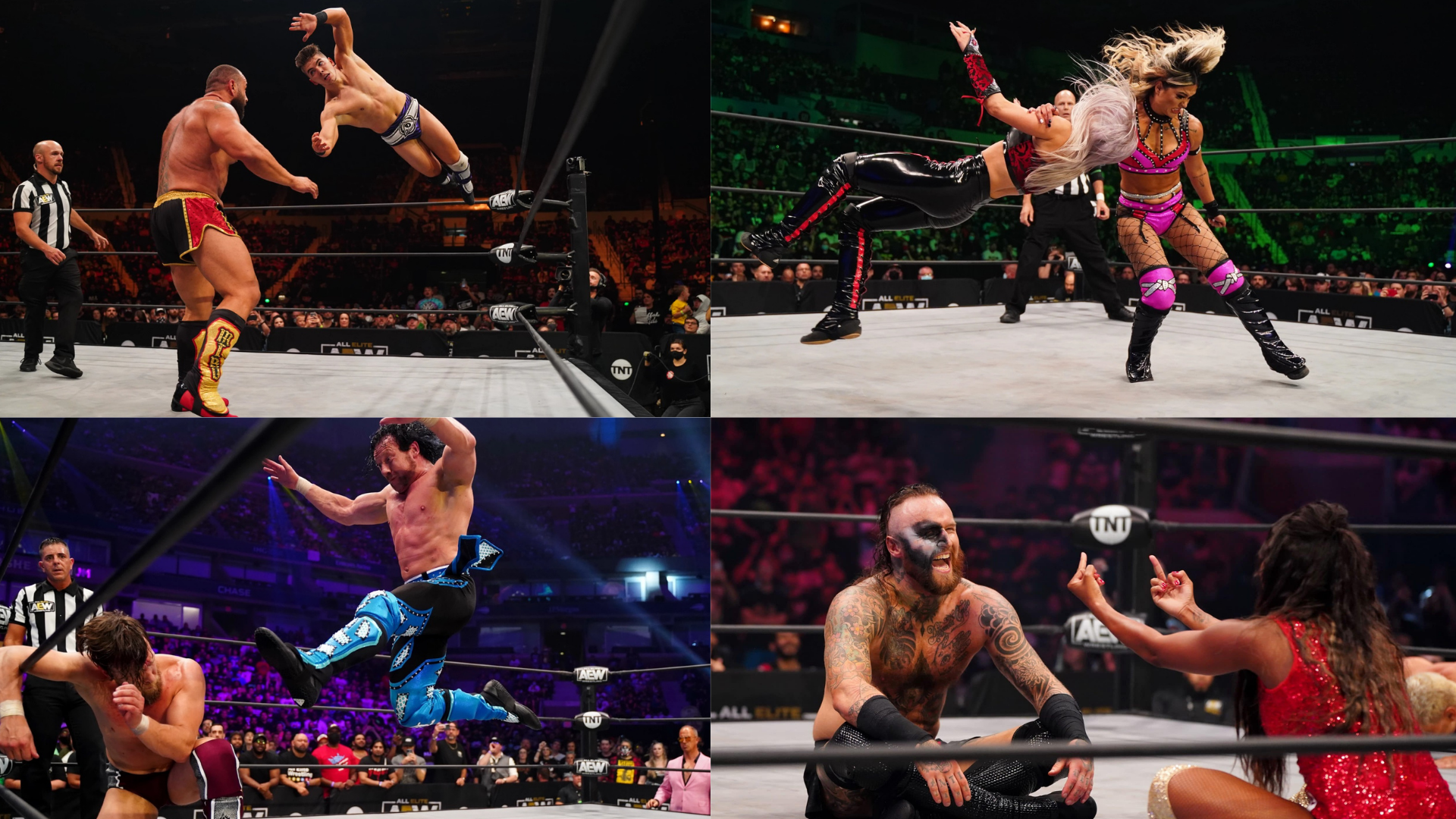 Dark background with low-light LED with various colors, a grey mat and black ring ropes. However, when you compare WWE’s newer set to AEW’s current one, you can again see the difference in lighting and color. White ring ropes and a light blue mat versus black ropes and a grey mat. 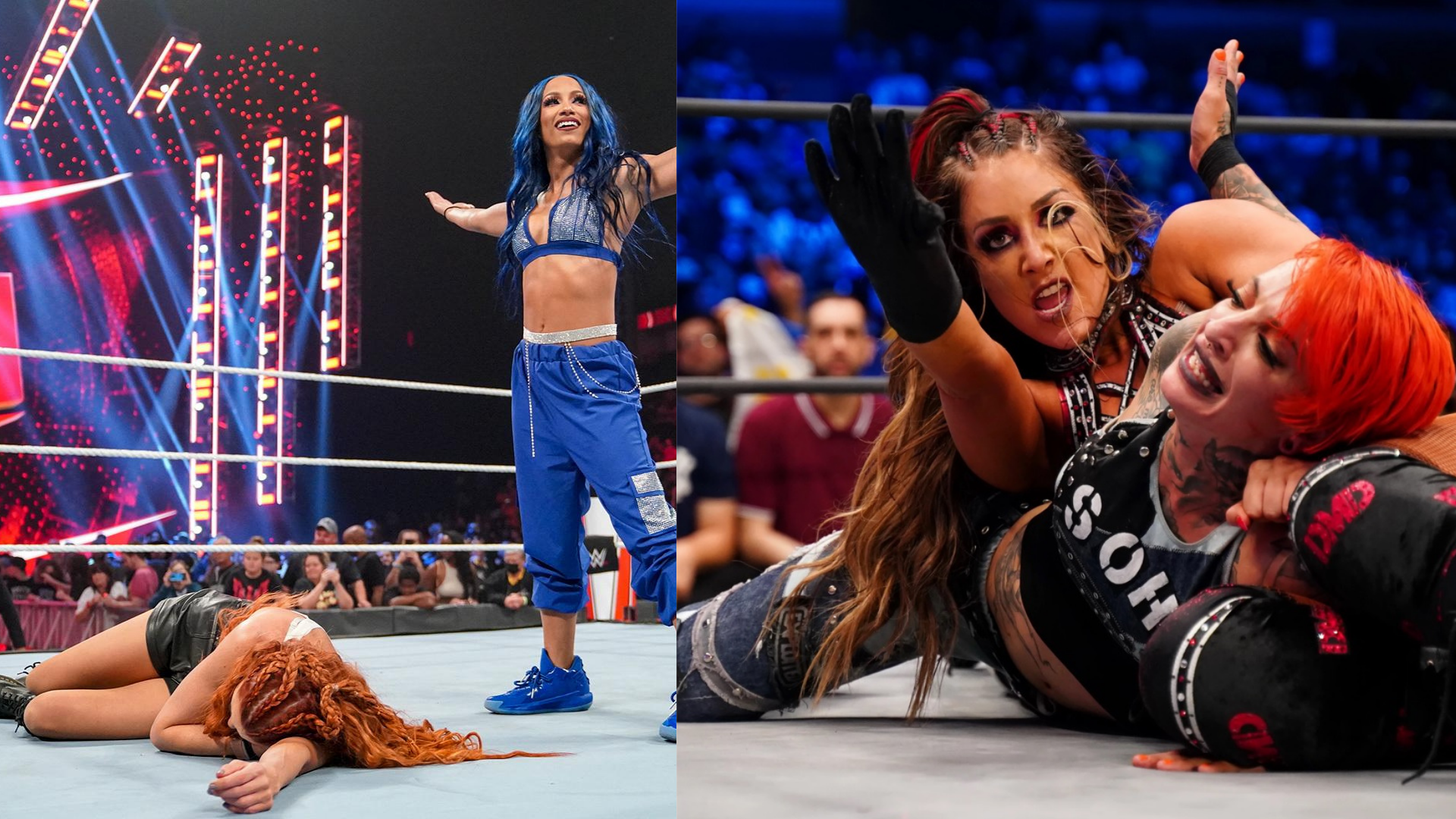 What’s in a Color?

So the question is this: Does a grittier, darker aesthetic contribute to more of a “big fight” feel (akin to boxing and MMA)? Does the overly colorful and almost cartoonishly bright set designs of Raw, Smackdown, and especially NXT 2.0, take the seriousness out of the WWE product?

The talent pools are similar. Even with the recent losses of Danielson, Soho and Black to AEW, WWE’s roster is still jam-packed with talent. But even with the over-production that WWE brings with their shows, as well as their formulaic style of wrestling, I should be able to take it seriously, right?

The problem with me, and I’m only speaking for myself, is that the brighter aesthetic kind of takes me out of the product a little. (aside from 50/50 booking, start-stop pushes, formulaic style of wrestling, and match repetition) — It doesn’t feel as serious, as if the attention is drawn to the bright lights and LED screens over the in-ring action.

It wasn’t always like this. If you check out a comparison below, you’ll see 90s era ECW, WWF Raw, and WCW compared to the current Smackdown product. Again, we’re comparing SD to HD, but everything about the first three feel gritty and somewhat realistic.

The lighting is focused in-ring, fans aren’t lit up by extra LEDs, and no flashy sets. Perhaps this is partially why many fans yearn for the Attitude Era — everything felt bigger, and quite frankly, more serious. I’m sure you remember the generally darker aesthetic of WWF Raw and how (for lack of a better word) cool it was. 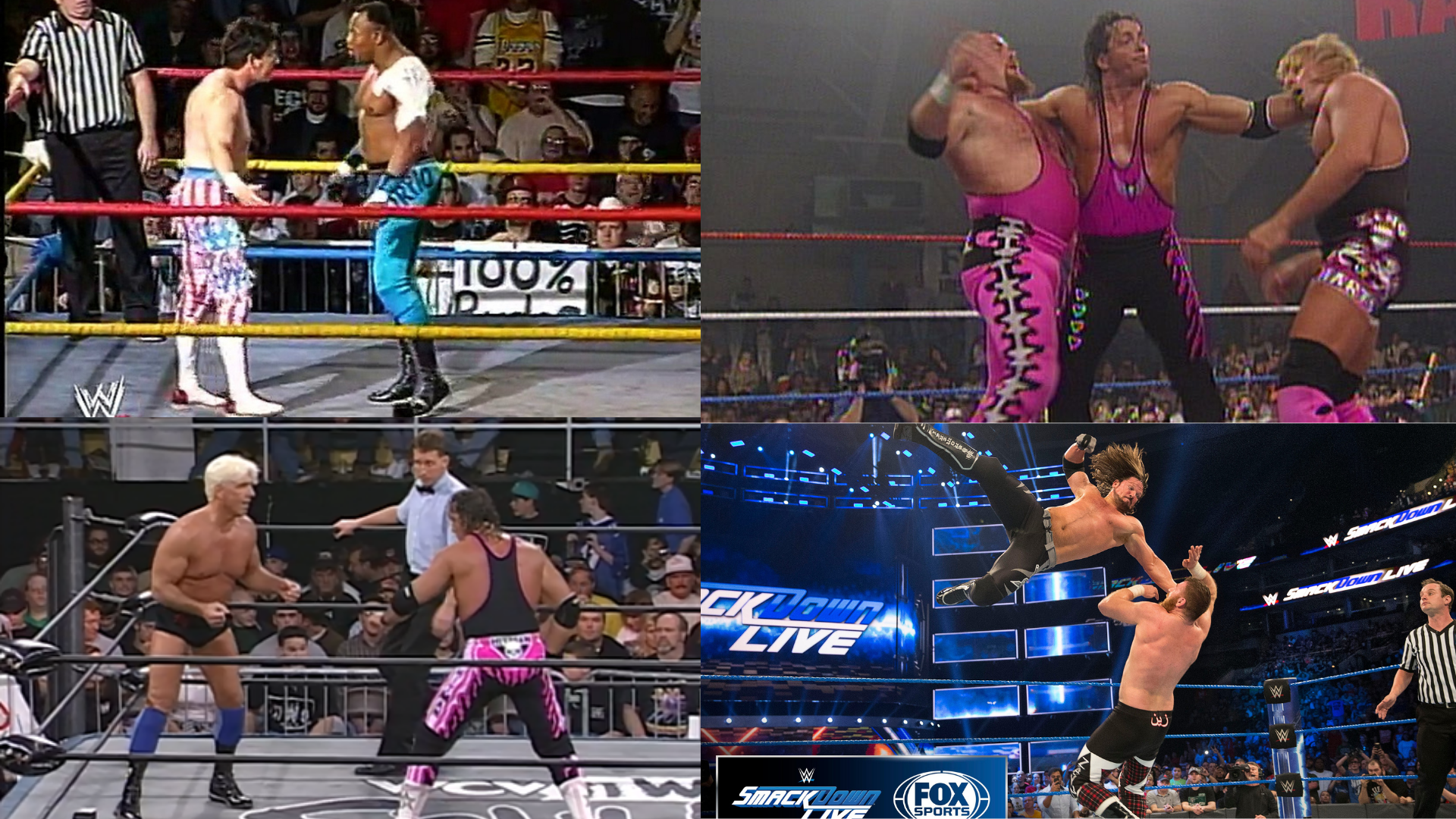 This is only an observation and a question. Does the lighting of wrestling shows affect how you feel about them? Does the over-produced and flashy WWE presentation get you into the product, or take you out of it? Or does it matter at all?

Think of a movie you’ve recently watched. How was the lighting, and how did it add to the story it was trying to tell? From Bringing Out Your Dead to Citizen Kane, lighting sets the subconscious tempo of cinema and television. This is especially true for any good horror movie.

I posit that even in professional wrestling, it does the same. Like it or not, AEW is the hot, new product right now. I believe a small part of that comes from the lighting. Sure, there’s pyros, lighting, and a generally nice set design — but it’s not potentially seizure-inducing like Raw or Smackdown.

AEW feels a little more “real”, and as a sports-based, wrestling-focused product, the darker aesthetic contributes to it. Now that doesn’t mean WWE is any less “real”, and that fans can’t enjoy the product, but I can’t be alone in the feeling that the presentation just feels like a bit too much most of the time.

But what do you think? Does lighting pop into your mind at all during a wrestling show, or do you simply look past it?