On December 31st, 2021, four women made AEW Rampage history. In what was a blood-soaked affair, The Bunny, Penelope Ford, Tay Conti and Anna Jay beat the absolute shit out of each other.

For the duration of the match, three out of the four would blade, and Allie (The Bunny) pulled off a blade job that Muta himself would be proud of. The match was met with mixed critics: Both with fans applauding the raw effort for the brutal match – and fans harnessing their inner-Cornette and labeling it “Outlaw Mudshow Bullshit”.

Without provocation, WWE (for some reason) decided to respond to the match in question in a recent article for the Toronto Star:

“If you look at the gory self-mutilation that bloodied several women in the December 31 event on TNT, it quickly becomes clear that these are very different businesses. We had an edgier product in the ‘Attitude’ era and in a 2022 world, we don’t believe that type of dangerous and brutal display is appealing to network partners, sponsors, venues, children, or the general public as a whole.” 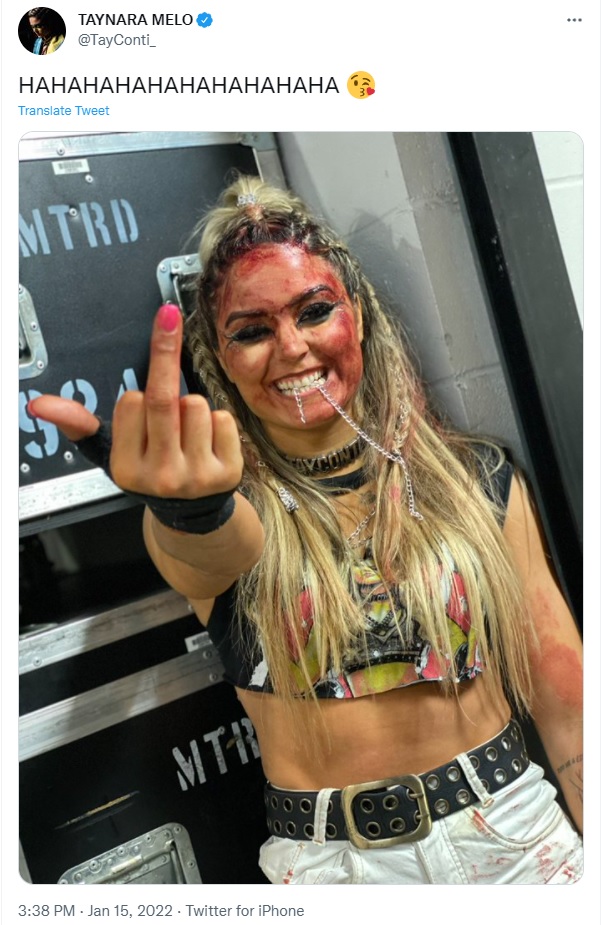 In all seriousness, this sparks a bigger discussion, and one we’re about to have together. Because when you take a step back at the events that unfolded, and the iconic imagery from the match (mainly The Bunny), a narrative takes hold…

The Myth of Advertisers and Blood and Guts 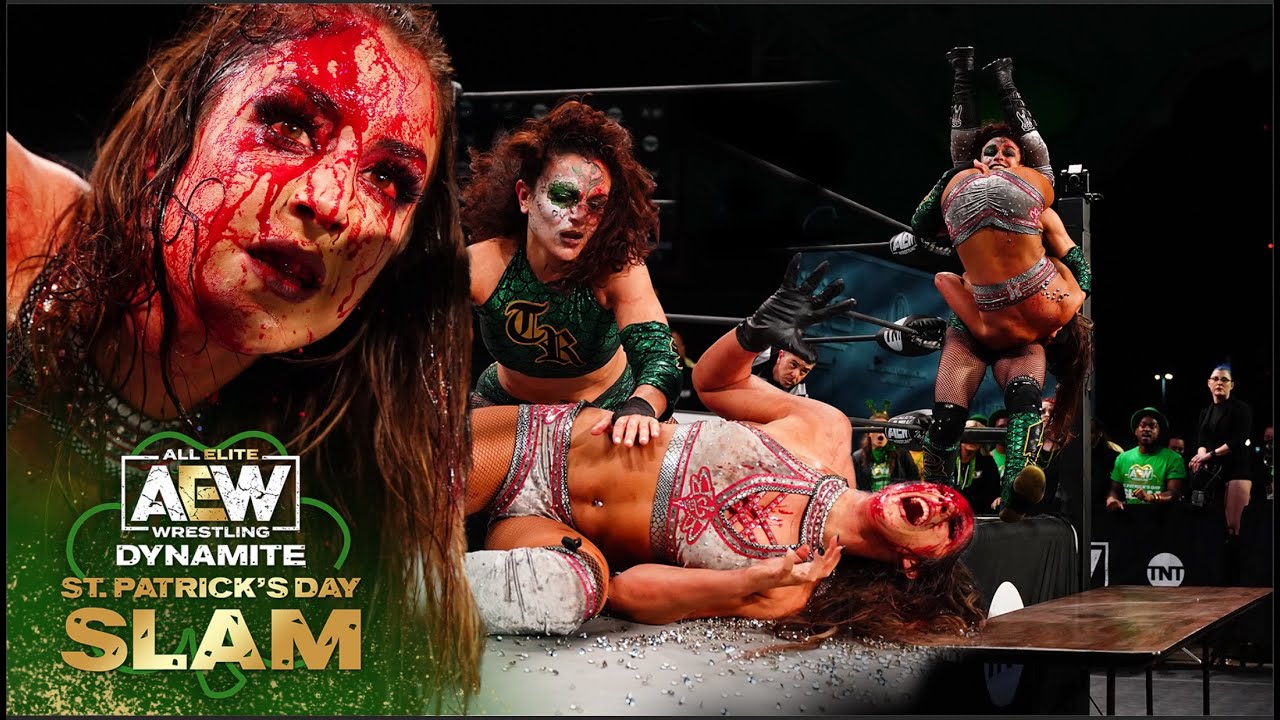 Before we get into The Bunny’s role in this, let’s quickly bust a myth or two  about the quote in question – that advertisers don’t want to affiliate with “blood and guts”. This spurns three points:

-The red stuff doesn’t seem to bother Fox, ESPN, and others when it comes to UFC. Ultimate Fight Championship is not staged, but it is a legitimately real fight. Often times, blood is spilled in the octagon. These things are just second nature when it comes to combat; real or simulated.

-Britt Baker took on Thunder Rosa in the main event of Dynamite’s St. Patrick’s Day Slam in March 2021, and both bladed heavily. Not only was it voted Match of the Year by Pro Wrestling Illustrated, but it didn’t cause AEW to lose any advertisers.

-Why are you exposing your own business by referring to a blade job as “self-mutilation”?

Bottom line is this: If WarnerMedia (TNT/TBS) has a problem with blood, knowing full well that AEW is a promotion that will push the envelope on occasion when it comes to violent matches, Tony Khan would have had no choice but to scale back.

Obviously, this simply hasn’t happened, and AEW still maintains a strong presence on TNT, as well as TBS. If the demo is strong and advertisers know that eyes will be on the product, then there is money to be made.

Now let’s talk about how ridiculous WWE’s quote is when it comes to a historical perspective. 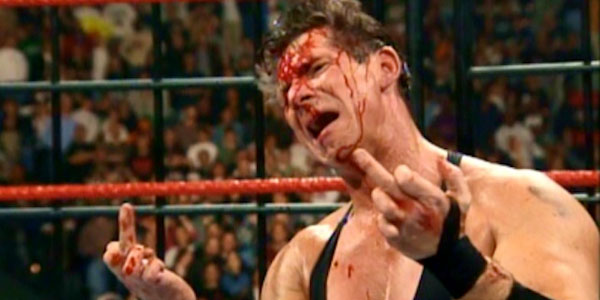 By 1995, professional wrestling had long been stale. If you think we’re in the PG Era now, check out some classic 94-95 WWF programming. It’s watered down with cringy family-friendly content. Both WWF and WCW were putting out an overly cartoonish and uninspired product at this time. As a result, WWF’s ratings were starting to crash, and WCW’s didn’t really pick up until Spring of 1996.

As a young teen, while I preferred WCW, I was still sort of “meh” to both. However,  through the wonders of tape trading (and eventually early pirating) I would discover ECW.

Without ECW, there would be no “Attitude Era”.

Furthermore, without the “blood and guts” edgy product that WWE now seemingly detests (and did A LOT of during the late 90s/early 2000s), I would argue that they may have lost the Monday Night Wars, and the wrestling landscape may look much different today.

Though sidenote: This is the same promotion that just a few years ago had Brock Lesnar cut open Randy Orton the hard way, with the point of his elbow – causing Orton to receive a concussion. It’s also the same company that had Kevin Owens legitimately headbutt Vince McMahon to open him up. But I digress…

And I get it, WWE is publicly traded, and wants to maintain a clean image. They have become a much different product over the past few years, and they are nothing like AEW, as well as others (New Japan, Impact, GCW).

But as their ratings continue to sag over the years, and AEW keeps their momentum, I wouldn’t be the one to take cheap shots by calling what is a long-held tradition in pro wrestling “self-mutilation”.

WWE needs to get off of their high-horse here.

The Bunny Will Be an Icon 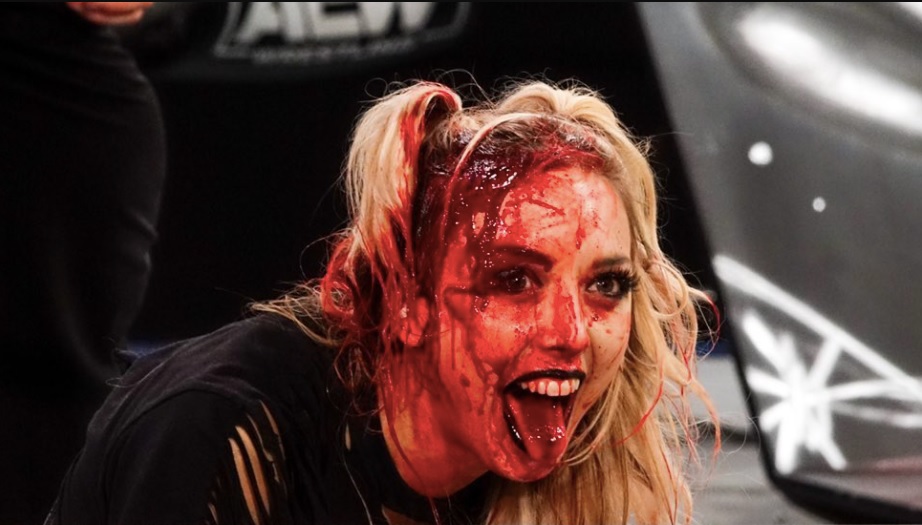 -Blood is a natural part of professional wrestling.

-Women can be treated equally in this sport, even with “blood and guts”.

The reality is that McMahon’s WWE only represents a small fraction of what is considered professional wrestling. His corporate product does not mirror what pro wrestling is traditionally held as. This craft has existed for well over one hundred years, in over thousands of promotions, and in dozens of countries.

And what these new fans are tuning into is wrestling in its purest form.

The Bunny’s head-turning crimson mask on Rampage represents a microcosm of what professional wrestling was always meant to be: A gritty, yet beautiful athletic artform that sometimes demands a bit of physical sacrifice (or blood).

The art of professional wrestling should always focus on what happens inside of the ring first, and what happens in an entertainment sense second. It’s not supposed to be “clean” and “polished”.

This idea is not lost on many promotions around the world; notably, AEW, New Japan, Impact, NWA, Stardom, and many others.

And to be clear, nobody has to spill blood to prove they’re a pro wrestler, or to put on great wrestling matches. But “blood and guts” (when called for in the story) is just as important to the culture of professional wrestling as over-the-top entrances and predictable heel shenanigans.

Wrestling is no longer the trendy attraction it once was. C.M. Punk was absolutely right when he stated that there is no such thing as a casual wrestling fan. Unlike the early to mid 90s, wrestling fans now have a plethora of options before them.

And a lot of these fans actually do want to see blood and guts on occasion. Professional wrestling is slowly going back to basics, but with a modern upgrade.

I promise you that inevitably, as pro wrestling evolves, more fans are going to prefer the raw and edgy nature of what professional wrestling has always been over a sanitized, corporate, content-machine.