The second “Next In Line” class includes athletes from 14 universities, seven NCAA conferences and seven sports, including the program’s first athletes from cheer & dance, gymnastics, volleyball, men’s basketball and representation from an HBCU program.

WWE’s comprehensive NIL program launched in December and serves to recruit and develop potential future Superstars, and further enhances WWE’s talent development process through collaborative partnerships with college athletes from diverse athletic backgrounds. “Next In Line” has signed 31 full-time college athletes since its inception and currently has 25 active athletes following the graduation of six inaugural members from the program.

All athlete partnerships will feature access to the state-of-the-art WWE Performance Center in Orlando, Fla., in addition to resources across the organization including brand building, media training, communications, live event promotion, creative writing and community relations. Upon completion of the NIL program, select athletes may earn an exclusive opportunity to be offered a WWE contract. All six athletes who graduated from the first class have either signed or are in discussion to join WWE on a full-time basis.

For more information about the inaugural NIL Summit, held June 13-15 at the College Football Hall of Fame in Atlanta, visit nilsummit.com. Learn more about the “Next In Line” program at wwerecruit.com. 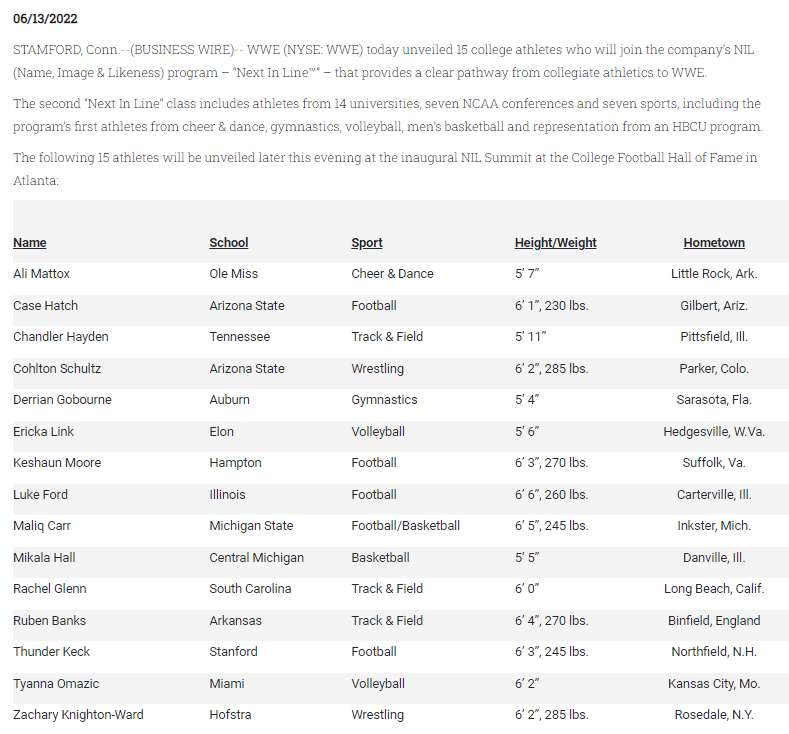