As previously noted, AEW President Tony Khan told fans prior to the May 5th edition of AEW Dynamite that they could get refunds if they were unhappy with the first hour of the show being pre-taped.

“The first hour of this show was interesting because it was all taped with no fans a couple of weeks ago, the whole first hour. Because of the cages, they did it to pretend it was live so they actually set up the two rings when they did the taping.”

“To set up the cage for the thing would take forever and they couldn’t do it live, they just couldn’t. That’s why when they did the advertising, they advertised it was going to be a one-match show. The idea was a one-match show for the people who bought tickets and so they wanted to tell everyone. There were people who didn’t know even though it had been advertised that way.”

“When the show started, Tony Khan went on before the cameras were on and said, ‘Okay, this is the situation, the first hour of this show is taped, we’re gonna be playing it on the screens. However, your crowd noise is going to be the crowd noise in this match, so cheer and boo like you would.’ ‘If for some reason you didn’t hear this and you’re unhappy, you can get a refund’, and they did give five refunds.” 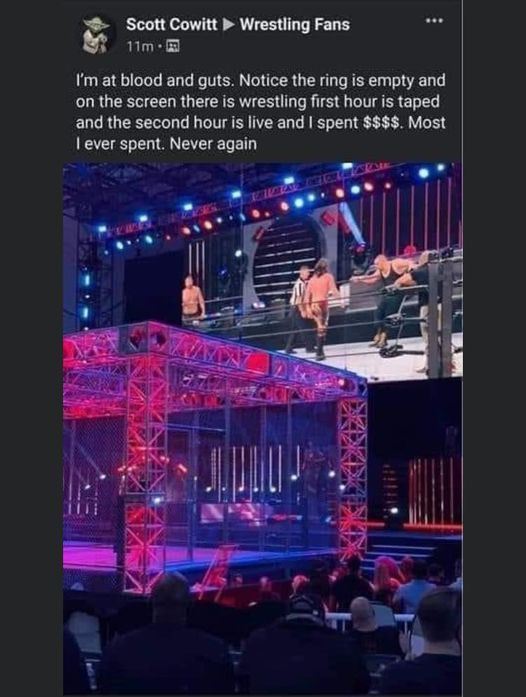