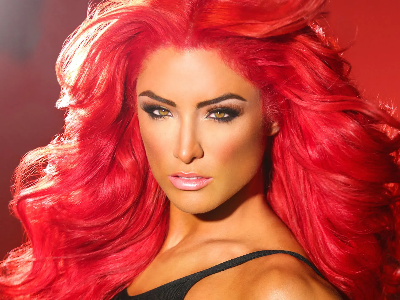 Eva Marie recently did an interview with TVInsider.com and here are the highlights…

Her return to WWE and character: “When you watch a TV show or movie, there is a good guy and a bad guy. I have no problem putting on that villain hat. The misconceptions people want to think of me? That’s fine. I enjoy it. It builds my character. I fell in love with it when I started. Over the last 10 months, since I’ve been signed, I’ve gone back to Orlando, and the Performance Center training with [coach] Norman [Smiley] has been fantastic. I absolutely love him. Being in the ring is something that has been pretty fun.”

Being paired with Doudrop: “I knew for quite some time about getting paired with Doudrop and the vignettes and going into that creatively. It was a matter of the timing of when it would be put in the actual show. It just so happened that now is the time. The fact that I got to experience the ThunderDome before we actually start having live crowds again is amazing. Having Doudrop to work with is awesome. Not only is she an incredible athlete, but I enjoy working with her because it creates another element to the division.”

Handling the criticism from wrestling fans: “I love it. That’s what it’s all about. I have the best fans. The WWE Universe is 100 percent the best fans in the world. The fact that I get love and hate, that’s what it is all about. I have no problem playing that villain. I embrace the criticism and all the hatred because I want all those fans to come to a live show and boo me, cheer me, be extremely happy seeing the smile on my face get knocked off by a Becky Lynch or a Bayley or a Rhea Ripley or anybody in the women’s division. If they’re talking, I’m doing my job.”

After weeks of teasers, Eva Marie finally made her grand return to WWE during the June 14 episode of Raw . Prior to that appearance, the polarizing star hadn’t been seen in a ring since 2017. That’s when the Total Divas alum decided to venture outside of sports entertainment.