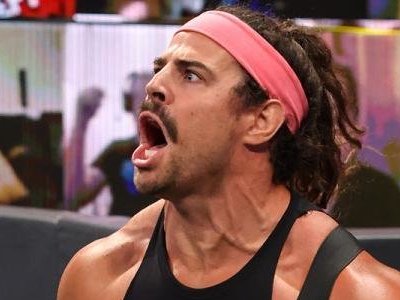 During an appearance on Corey Graves’ After The Bell podcast, WWE Smackdown star Rick Boogs talked about his debut with the brand…

“I was shocked, I was stunned. I had, let’s say about 12 hours of heads up. I get a text like the night before to be at SmackDown, and this is what I was going to do: so, I play his theme on guitar, sure. I [played] guitar [before], but I hadn’t played guitar other than a little bit here and there. I hadn’t practiced in like 15 years. From time to time, maybe I’ll do something simple and easy and just put it on Instagram, but it’s not like I practice. I’ve played this song when I was 16 years old. I can remember it. So, then they’re like, ‘learn this’, and I’m like, ‘of course I’ll do it.’ But the anticipation and the nerves with that? Not just playing guitar, because I was in a band in high school and the biggest crowd we played in front of was 25 people. So now, it’s like, can you learn this thing in a matter of hours? Everyone’s going to judge you, it’s going to be in front of millions of people, and it’s not really what I do.

I think it was the first day I was at SmackDown and Bruce Prichard was [there], and I did the Old Spice ad campaign and apparently Vince watched and was like, call the guy up. Just from the character work alone, this is what I heard. Then they had to figure out what to do with me. It’s like, what does he do? I don’t know? Is he on NXT? No. They went on my Instagram, and you know what it was? I did this video where I did a lunge, I had a bar on my back, and I was playing the trooper on the guitar. Bruce said that Vince was going to love that because he loves lifting weights, I guess that was it. Oh, he can play the trooper while he’s lunging 345 pounds, let’s just have him bust out [Shinsuke Nakamura’s] tunes to live people.”

“I was flabbergasted on how it was going to end up,” Boogs said. “Let me just stress it, I wasn’t practicing guitar at all. [Shinsuke’s music], it’s all bends and stuff like that. It’s a violin, so it’s a little bit different than a guitar, it’s bends, it takes finesse. So, I was thinking maybe I’d play the rock and roll version. So, I’m playing it during rehearsal because they want to see what it sounds like. And Triple H is there and watching, and he’s like ‘I don’t know, maybe turn down the distortion,’ he didn’t know what it was but it just didn’t sound good. He’s like ‘It sounds like you’re trying to play it but you just can’t.’ I was like, okay, let me try something else. Then I played the silhouette, so basically this was with no practice, and obviously, I’ll be the first to admit it, the first few times doing it it was rough. Not very good. It was off.

It was hard for me because I didn’t have the earpiece to hear what I was playing, so I can’t even hear the guitar when I’m playing it either. I just thank the lucky stars that people dug the act, we did it for long enough, and now I feel better with it and more comfortable with it. But those first few times were nerve racking. They helped me a lot, they gave me an earpiece so I can actually hear myself and bend the strings to try and match the notes better. Now, that I’m scrapping in the ring, I wear a denim singlet. I don’t have real pockets, so there’s nowhere to put the battery pack, the long cord. I’ve been doing it long enough so now I don’t even need it. Just send me out, I’ve got a feel, baby. I’ve been doing this for like four months playing this now, now I’ve got it.” (quotes courtesy of WrestlingInc.com)