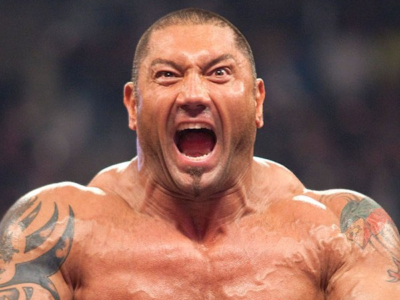 In an interview with IGN.com, Batista talked about his transition from WWE to acting and how he was “broke” prior to being hired for the 2014 Guardians of the Galaxy film…

“For people to really understand how much my life has changed, they would have to understand where I came from, what I went through when I was in wrestling, what I left behind to take a chance on going into acting.

And when I got the role of Drax in Guardians, I barely worked in three years. So I’d really left wrestling behind and I could have gone back with my tail between my legs, but I still [would] have been just stuck in a place that I never would have gone any further, but I just took a chance. And then when I got [cast], not only because I was broke, [everything changed]. When I say broke, my house was foreclosed, I had nothing, man. I sold all my stuff. I sold everything that I made from [when] I was wrestling. I had issues with the IRS. I was just lost in everything.”

While it seems normal to see Dave Bautista starring in some of Hollywood’s biggest movies, like Denis Villeneuve’s upcoming adaption of Dune or Zack Snyder’s Army of the Dead, fame and fortune weren’t always easy to come by for the former wrestler turned actor.